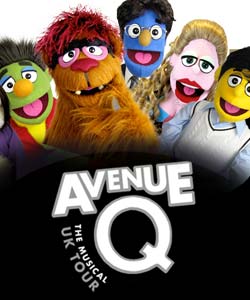 Avenue Q at The Palace Theatre

OK, time to confess. My name is Chris Park and I spent my Tuesday night laughing at puppets having sex. There I said it. Despite this rather blatant attempt to grab your attention, I have to say that the puppet-tastic Avenue Q is an incredibly clever way to highlight the problems that young people face when coming into the adult world.

The action features around an American street where puppets and adults live side by side (noticing any similarities here?) but are struggling to cope with the pressures inflicted on them by careers, peer pressure and the ever present Bad Idea Bears (more of this later).

What is really clever is that the puppeteers are in full view of the audience. At first I thought I would find this distracting from the storyline but before long I came to accept them which proves the theory that, providing it is executed well enough,, an audience can learn to live with most things.

The characters that really stole the show for me (which is probably a bad reflection on me) were the Bad Idea Bears, these are two impossibly cute creations who gambol onto the stage and suggest beer, Long Island Ice Teas or more sinister pursuits. We’ve all fallen prey to these naughty bears, some of us more than others, but the outcome of their tricks generally land our heroes in seriously hot water or seriously hot bed action.

This was a show that I went to with hardly any expectations and was really pleasantly surprised. The puppet work is exceptional but the script doesn’t just rely on this gimmick and gives us well rounded characters that we can all identify with as well as the perfect excuse for subsequent bad behaviour, after all it wasn’t me, it was the Bad Idea Bears!