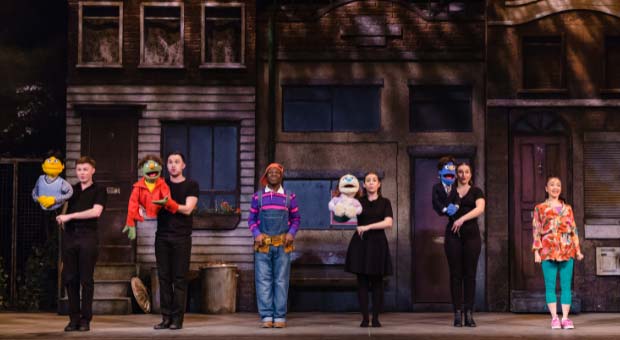 Originating off-Broadway in 2003, Avenue Q quickly proved to be a hit, transferred to the main Broadway strip and became a global sensation. The latest tour of Robert Lopez and Jeff Marx’s outrageous musical plays this week at the Palace Theatre and has lost none of its power to emote.

Princeton is a recent college graduate searching for his purpose in life. Looking for work and an apartment, he sets out at Avenue A, where property is beyond his wallet, continuing down the streets until he finds something affordable – on Avenue Q. In this less than salubrious New York borough, Princeton gets to know the local characters, finds love, and his purpose.

Described as Sesame Street for adults, four puppeteers bring to life each character, and, whilst the humans may be in full view of the audience, they become invisible as we are drawn in by the animations enshrouding their right arms.

These larger than life characters are joined by three humans – Brian (understudied by Ellis Dackombe), Christmas Eve (Saori Oda) and Gary Coleman (Nicholas McLean). If you're over a certain age, yes THAT Gary Coleman (from TV’s Different Strokes), and that is the one element that jars slightly.

The show is 16 years old and some moments feel dated; the music cassette that Princeton gives to Kate Monster is now a CD, but the song still refers to a mix tape; and if you do not know who Gary Coleman is the running gags about his life throughout the script are lost.

However, that aside, this is still a brilliantly funny, emotional show guaranteed to make you smile and fall in love with the Avenue Q misfits. If you’ve never seen it, don’t miss it; if you’ve been before you won’t be disappointed in this latest five-star production.