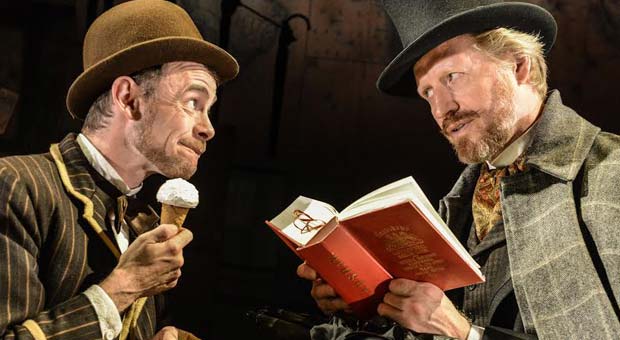 Around the world in 80 days

Around The World In 80 Days at the Lowry

At Christmas, there are so many shows to choose from, that it becomes very difficult to decide what you should see. I have seen most of the offerings in Manchester, and last night, I found my winner!

Laura Easton’s adaptation of Jules Verne’s classic Around The World In 80 Days, could have ended up as a faithful version, which has all of the expected story arcs and character traits. Instead, it shakes up the original and remains respectful, but so inventive, frenetic and funny, that it leaves you feeling warm and toasty inside, whatever the weather.

Easton decides to tickle the funny bone from the moment the play begins, through the gift of repetition. We see our hero, Phileas Fogg (played with gusto by Andrew Pollard) wake up, face the day, bored and then, rinse and repeat. But, the sight gags, make your belly ache, as the cast are so athletic, that they cover every part of the stage and beyond.

Fogg’s sidekick Passepartout is played by Michael Hugo, and this gifted actor, has the facial expressions and physicality of a young Lee Evans, and his interaction with the audience, knocks most pantomimes into the long grass. He also exudes disappointment, every time he let his boss down. He is truly delightful, and I could return for his performance, alone.

Salford’s Matthew Ganley manages so many roles you lose count, and he has the panache and cheekiness required, with knowing glances, as he and you know that this is a zany and downright silly play, therefore it gives these actors room to breathe and tweak the material, as they go.

Dennis Herman resists the urge to morph into a panto villain, but reminds me of a great silent movie star, as his body language is a joy to witness. There is so much talent on this stage, you daren’t look away for a minute.

With a minimal set, the cast enable your child or inner child to use their/your imagination to the max, and this works beautifully, when we witness an elephant, an air balloon and some wild buffalo. This is not a big budget production, but who needs heaps of money spent on a show, when it has a heart as big as Manchester?

There is a great deal of good stuff to see in the region between now and January, but I would take your family or friends to see Around The World In 80 Days, above all the other competition, as it is funny, feel good, and has the sort of slapstick comedy that is reminiscent of Airplane meets the Keystone Cops, and as for kids? They will be begging you to travel back for an open return to take a trip Around The World in however many days you have left for a second or third visit; yep, it’s that good!