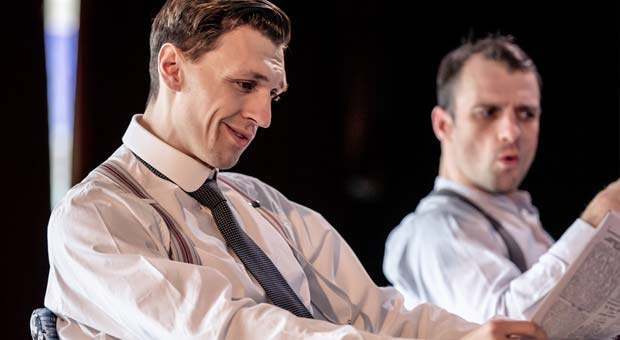 And did those feet, Bolton

Though Bolton Wanderers may not be performing at their peak in current times, Les Smith and Martin Thomasson’s drama remembers the glory day’s, one in particular, which transcend from simply football to something stimulating for even ‘non-football fans’.

A fun and emotive journey that follows the footsteps of Bob Stott (a newsagent and fanatic Bolton Wanderers fan) from Bolton to the withering heights of the new (in 1923) Wembley Stadium to watch his beloved side in the FA cup final.

Early in the performance we are introduced to the emotional story of Hilda, Alf and the loss of their son Billy to WW1.  The family managed to quickly change the tone of the show, stunning the audience in to silence with  powerful performances, in a scene where Hilda takes time to reflect and speak to Billy through his possessions and Alf’s early return leads to an explosive introduction.

The storyline linking each journey brings welcome respite, as comedic scenes from Bob along with those from Ted, Martha and Jim lift the mood of the show, bringing a smile and laughter to the audience once more.

Aside to Bob’s humorous and impressive trek, a community is galvanised by the performance and journey of their football club, at a time where economic decline and industry downturn led to a true northern struggle, as ‘short time’ was being introduced right across the north west factories and foundries. It gave people purpose.

Use of 8mm style film effect was used on a number of occasions, capturing the the Bolton Wanderers fanatics rollercoaster ride through the FA cup. It was a clever way of finding a laugh with non-verbal acting from the cast.

Though a poignant scene, where Hilda recalls how she interacts with a Bolton player, who was boarding the train to the Capital for the a forth round tie against Charlton Athletic, he recognises ‘Billy’s mum’ and states ‘We’ll win it for Billy’. This prepares the audience for a crescendo, an FA cup final remembered through the ages for more than just the football.

A great descriptive recollection from Alf, of the scenes that day at Wembley Stadium and that police man and his ‘White Horse’ (who’s name is now given to a bridge at the new Wembley Stadium), took the audience right back to that day.

Solidarity, purpose and a coming together of a community with differing beliefs throughout in tough times. A sad, funny and deeply moving story.

Really strong cast. Actors playing Hilda and Alf gave some really strong and emotive performances that dealt with grief and loss hit also finding solace in the football community. Martin Barass was excellent as Bob and provided lighthearted and funny musings and commentary throughout. My personal favourite was church-going, sensible Martha who had to contend with football mania instead of church meetings and her upcoming wedding. The cast was small and they worked really well together.

There was also some insight into the growing interest and unrest around communism at the time which provided another element of the story and weaved well into the the other storylines.

It was really fitting to have it at Bolton Wanderers with the football pitch in the background. I think they could’ve probably made more of this because once the lights went down it was just another soulless function room to be honest. But it’s good and fitting that they could do it here whilst the Octagon is being refurbished.

A football story told not on the terraces alone but within a community, about a community.

More information about the show and cast here: