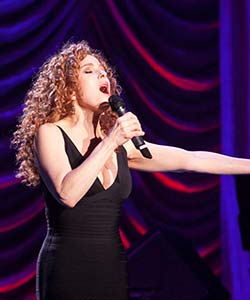 An evening with Bernadette Peters

There simply isn’t anyone quite like Bernadette Peters, who remains one of Broadway’s best known living stars. Bernadette Peters has racked up no less than three Tony Awards, two Golden Globe, and two Drama Desk Awards.

Her most renowned roles included The Witch in Stephen Sondheim’s Into The Woods and Dot/Marie in Sunday in the Park With George, as well as being a Mama Rose in Gypsy that could give Imelda Staunton a run for her money.

Bernadette Peters has also been involved in the recent Sondheim revivals of A Little Night Music and Follies on Broadway.

Her signature collaborations with composer Stephen Sondheim began some 32 years ago, with Sunday in the Park with George, and her return to the Manchester stage for the first time in 15 years saw her performing with all the style and gusto which belied her 7th decade.

'That dress is sublime. Yes and you too would look great in it' remarked one gentleman to another sitting directly behind us and that was to set the tone for the entire evening. Indeed there can be no doubt that The Rem and Company Bar (both well know male gay bars in Manchester)  must have been deserted for a couple of hours as their combined clientele appeared to be at The Opera House on this sizzling, Sunday evening.

'If you want to buy a 5 bedroom, 6 bathroom house in Florida, contact Ms. Peters for further particulars'  announced Bernadette on arrival and immediately captured an adoring audience. Additional quips relating to new friends she had met the previous night from Inverness at The Midland’s Mr Coopers, showed that she was as at ease on the Manchester stage, as she has been over many triumphant years as one of the great leading ladies of Broadway.

We were also to be treated to a satisfying sprinkling of Rodgers and Hammerstein 'Nothing like a Dame' and a sizzling version of 'Fever' that saw her sprawled across a grand piano. 'Fever' is a song written by Eddie Cooley and Otis Blackwell, who used the pseudonym John Davenport. It was originally recorded by Little Willie John in 1956, and became a signature for Peggy Lee. Ms Peters made it her own tonight.

The evening's composing credits however belonged firmly to Sondheim with about 80% of the entire programme.

And what a setlist we were provided with..

'Mr. Snow', 'It Might As Well Be Spring', 'In Buddy's Eyes' and 'Losing my mind', the latter two both from the lavish Follies score, all enthralled and with 'Move On' and 'Joanna'  (both songs originally sung by men) she carried them all off perfectly.

Personal favourites included 'Send in the Clowns' from A little night music and finally the optimist’s anthem 'Being Alive' from Company. Yet another male lead number.

Another notable memory of the evening was the 'deafening' silence that existed through many parts of the her performance. You literally were able to hear a pin drop. Not a cough or a smartphone to be heard or seen. This a rare ability in a large Victorian theatre packed to the rafters on three levels.

The voice is still there (the vibrato is slightly slower, but she is nearly 70 damn it) as is the figure. Bernadette Peters commands her craft with apparent ease and is a rare and stylish entertainer who clearly still relishes in sharing not just her own talent, but also that of her musical collaborators and all with the support of a group of 11 superb musicians.

The encore was a song of her own, 'Kramers Lullaby', where she joined the entire front row audience and following this beautiful finale, she exhorted us to kiss people, animals, in fact any living around us.

We kiss you right back Ms Peters, you ethereal dreamer.

So as we all spilled out of the theatre into a lovely, balmy Manchester evening a large group was already gathering at the stage door for a glimpse of Ms Peters, the satisfaction of all was clear, presumably matched only by the relief of the owners of said Rem and Company bars, where normal business was resumed.

For those of you who missed this performance here is a link to a Saturday Night Live clip!.https://www.youtube.com/watch?v=fXpDyT4xpFw