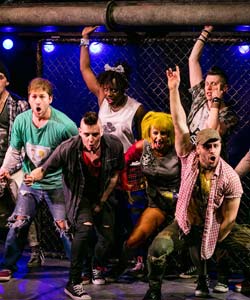 American Idiot at the Palace Theatre

It’s a post 9/11 record, which is far more than another piece of music.

Ideal material for a stage musical, then? If you are a fan of the rock opera Tommy, then yes, as essentially American Idiot is The Who’s grand rock opera meets Trainspotting.

When it premiered in Berkeley, San Francisco - the show was very intimate and immersive. It then transferred to New York and it has toured the UK in a stripped down version. It returns now, in the capable hands of Sell A Door. And thankfully, their low rent version of Footloose, currently doing the rounds, is not a barometer for success here.

The cast, production values and band are all on point here, bringing this iconic album to life with imagination, flair and panache.

Matt Thorpe is an engaging lead, as Johnny – he has a ‘rough and ready’

feel to his performance, which belies that of cutesy musicals and it is incredibly refreshing. Amelia Lily is plastered all over the publicity material and even though she is in good voice and has the swagger required, the role of Whatsername is barely there. It would be great if the role could be adapted, as she is better than the role requires her to be.

Cellen Chugg Jones is tremendous as Tunny, a man torn between bumming around doing nothing or singing up to join the US Army. He has a gravelly voice and stage presence to burn. His is a towering performance and you cannot take your eyes off him. Lucas Rush is disconcertingly good as St Jimmy, reminiscent of the narrator in Blood Brothers but with more attitude. Every time he appears on stage, the show gains momentum and energy.

Alice Stokoe, Emma Housley, Jemma Geanaus and Karina Hind all shine in tiny roles. Hind and Geanaus give out the attitude required to lift a rock musical to the feel of a gig.

Sara Perks set design is minimal but effective and gives off the claustrophobic feel that Johhny feels, as he is trapped. Ashley Joiner’s video designs have the humour required to make you smile, as there is plenty to laugh at here, amidst the darkness.

At times the pace slackens, when the cast are required to emote, without music. But when you have the likes of Wake Me Up When September Ends and Boulevard of Broken Dreams; it’s not long before you are carried by Green Day’s epic tunes.

Some fans may expect a gig with a smidgen of plot. But, Green Day’s music has narrative running through it like a stick of rock, so even if you are not a fan of the music – there is enough good stuff here to entertain you. It might even convert you.

If you sighed all the way through We Will Rock You, as you felt  it had the songs, but a paper thin plot; Idiot has far more than a jukebox and with Manchester’s up and down weather, it serves as a genuine Spring Awakening.

To sum up then, American Idiot gives you rock anthems with a conscience delivered with passion and authority by an excellent cast.

American Idiot is t the Palace Theatre until 9 April.