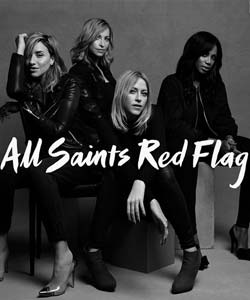 All Saints at Manchester Academy

Here is what we thought...

Canal Street Online was privileged enough to attend the Academy on Saturday Night for All Saints who were in Manchester as part of their Red Flag tour. It has been 15 years since the girls last did a headlining tour and has been a long time coming.

For those who were fans of the band in the 1990’s it was a night not to be missed and certainly one that didn’t disappoint. The night kick started with special guest Hanne Leland who got the crowd going. On the subject of the crowd the atmosphere was electric and it was incredible to see how packed the venue was. It was rammed from the front of the stage right up the back of the concert hall even before All Saints came out on stage.

All Saints kicked the night off with 'I know Where It’s At' thus setting the tone and kept the entertainment consistently high for the entire night. As well as the classics the band treated to us to songs from their amazing new album aswell as a little tribute to Beyonce with 'Formation' early on in the set.'Black Coffee' and 'Rocksteady' followed quickly and sounded as fresh as ever.

When a group are as good as this it really doesn’t matter how long they go away for, when they do come back they are always going to be met with an enthusiastic reception. The girls kept the crowd going all night and didn’t let up at any point.

They all looked great too. Shaznay's huge gold hoop earrings in particular were so brilliantly 90's and they each looked like rich/attractive/privileged working mums!

The little solo section showed how good Mel Blatt and Shaznay's brief solo ventures were. '24/7' and 'Never Felt Like This Before' were great highlights, albeit too short.

New tracks like 'Red Flag' (title track off recent album) and 'This Is A War' sounded great with wonderful support from a  brilliant band especially on percussion/drums.

'One Strike' and 'Pure Shores' were the perfect encore choices. The latter made me wish William Orbit still produced music regularly.

All in all, the Academy was packed with a great crowd who showed the girls lots of love. This was a nostalgic evening, but not at all twee.

If you get the opportunity to see the All Saints on tour I really do recommend that you make the time to do so. They seemed so genuine and happy about the warm reception they received throughou the gig.

All Saints are performing across the country for the next week so if you’re looking for something to do you certainly won’t be disappointed.

For more information about the tour and more, visit here.