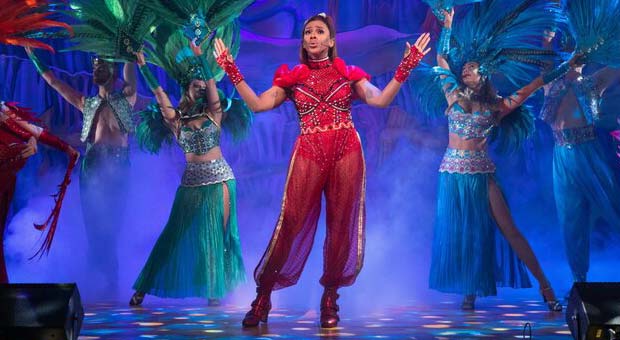 Alexandra Burke is the star of the shows in Aladdin add amazing number with all the glitz and glamour at Manchester’s opera house will bring a  smile to any panto loving audience.

The message is “panto has missed you”, adorned throughout the theatre on Christmas cards for the audience.

A packed theatre, full of happy theatres goes and lots of happy children. booing the baddy and cheering for the heroes. The true feeling of a fabulous panto which doesn’t disappoint.

The cast and crew of Aladdin know that panto has been missed and know how to create a night of huge laughs, mega-hit musical numbers, brilliant dances and plenty of risque jokes for the adults.

Alexandra plays the majestic character of Scherezade,the spirit of the ring as well belts out some of her biggest hits.

My favourite part is in the second half where Alexandra shows off her dancing skills from Strictly Come Dancing in a fantastic dance-off with Wishee Washee played by Ben Nickless, which is just fantastic.

There is all the magic of Panto throughout the show with Aladdin, the hero played by Matthew Cook, the baddie of Abanazer played by John McLaron plus princess jasmine played by Rumi Sutton who displays the ultimate girl power by being the one slay the beast.

Finally the light of the night has to be Widow Twankey played by Ceri Dupree, who gets as many wardrobe changes as Lady Gaga and even becomes her during the performance.

This is a must-see production of Aladdin for good laughs not matter your age. Just remember your mask.