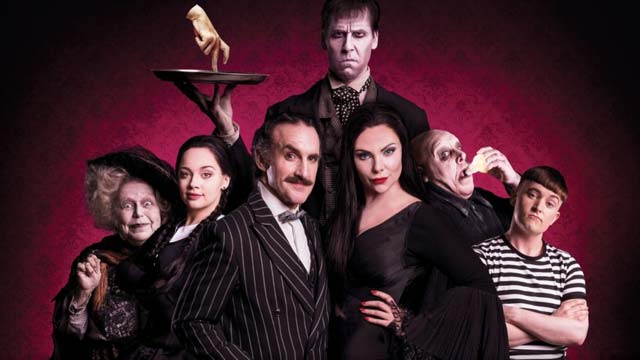 Addams Family at The Lowry

The Addams Family at the Lowry

The theme tune to the TV show is instantly catchy and nostalgic, inviting you to click your fingers, and even though the tunes in this Broadway musical, are not quite as memorable, this production is lifted by a brilliant cast, who give it all they are have, as the spooky and kooky family.

The dark clothed ones are headed by Cameron Blakely who is suitably suave as Gomez, and he is supported ably by the darkly delicious dulcet tones of Samantha Womack, as Morticia. And these two do not imitate Raul Julia and Angelica Huston from the hit movies, they make the roles their own.

Carrie Hope Fletcher belts out every tune with true precision as Wednesday, so much so that every performance she is in, feels like Saturday night, as opposed the middle of the week. Valda Aviks steals the show as Grandma, alongside the brilliant Les Dennis as Uncle Fester.

The plot though, is barely there.  Wednesday brings home a new beau, Lucas (Oliver Ormson) and in turn, the Addams’ mansion now has light and colour, which is against these family values. Enter the in laws, a 'Janet and Brad' from Rocky Horror, who arrive sexless and leave sexed up.

This is a show that borrows from the likes of Richard O’Brien and some of the songs feel like they are from another show, also. One Normal Night, for example feels heavily influenced by show tunes from the hit musical Chicago.

Marshall Brickman and Rick Elice’s books spends a great deal of time on the adults, but much of the slapstick comes from the kids. And if this was more evenly balanced, the show would flow more coherently.

The look of the piece is perfection though, Diego Pitarch’s set design acts like a supporting character and invites the audience into this wild and wacky world. For me, Womack and Blakely completely embrace the material and lift the show when it starts to flag. So, much so that you start to forget that the plot is wafer thin, and you just have fun with it.

And anyone who is getting excited that Strictly is about to return to our TV screens, there is a terrific tango in act two, which conveys Gomez and Morticia’s everlasting love and it is to die for.

This crazily talented cast lift the show to such great heights, that; flaws aside, you end up with a dead funny night out.

The Addams Family is at the Lowry until 9 September.