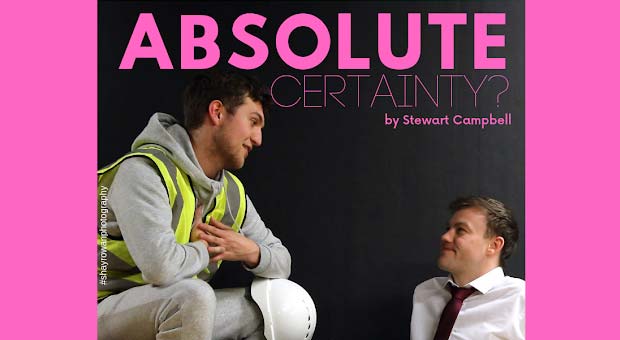 The characters are well realised. We have laddish builder Deano (Samuel Edward Taylor), whose idea of a good night out is one fuelled by ketamine, testosterone and beer, and whatever he says goes. Next there is his not quite as laddish mate Lee (Kyle Fisher), who goes along with most, but not all, of Deano’s excesses and occasionally manages to curb them. Finally we have Finn (Sam Kerr-Baxter) Deano’s sensitive younger brother who has educational aspirations and is hoping to go to university.

Two unseen and anonymous characters are the brothers’ parents, only referred to by their titles, but who have a sway on how things unfold. The brothers still live at home with their father. Mother – who has sapphic tendencies – moved out long ago, and is never spoken of. Finn is held in contempt by his older brother, who dismisses him as a “princess”. Lee isn’t dismissive of him, and, without telling Deano, delivers a card from Finn’s mother wishing him well in his upcoming exams. As the flyer for the play says, this is the pivotal event.

After a particularly excessive night out, Lee crashes at Deano’s and Finn would obviously like to know Lee a bit better, but is this reciprocal? This is where the first act closes and the original production ended.

In the new second act we can tell that something has happened but nobody is talking about it – although a few text messages are indicative of what occurred and between whom. There is another night of excess where Deano and Lee fall out, during which Finn – who has now turned 18 – gets very high and very drunk. Surprisingly, Deano takes the moral high ground and whilst trying to get his younger brother to sober up he finds the card. From here on it’s quite a ride, with some unexpected turns.

Besides the humour, we have confrontations, and although these initially stem from differences between the people we see, they’re ultimately about the characters confronting themselves.

This is a strong play, with strong characters and strong language. It’s well produced by Daniel Waterhouse, and well executed. The portrayal of the characters is excellent, and adding the second act works perfectly. This cast all trained at is Alra North with details here

Given the subject matter you might expect nudity – but it’s not necessary as the play carries itself well without it. The only slight distraction is having those on stage change the set around periodically but there isn’t really any other way it could be done. It’s a small point though and doesn’t detract from a very good evening.