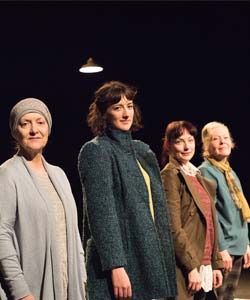 Three generations of women at The Lowry

This is a story of the horrors of moving back in with your mum in your 30s, of finally appreciating the best piece of advice your grandmother ever gave you and of extraordinary family secrets held across the generations.

We were there for the first night and here is what we thought.

If ever there was proof that you didn’t need a fancy stage set and state-of-the-art technical wizardry to put on a punch-packing performance, this is it.

The set is made up entirely of large cardboard boxes which are moved around scene by scene by the actors to create the various rooms /houses of the 3 women involved.

We meet Frankie, a thirty something singleton and hitherto successful career woman who has made a conscious decision not to have children, and who moves back home to look after her mother who is dying from cancer.

Her lifelong friend, Maya has never left Yorkshire and has spent more time with Frankie’s mother and Frankie has over the years. It is clear that Frankie and Maya have that special bond that true school friends have and proves that time and distance do not diminish special friendships.

Frankie’s mother, Gilly is the first woman in her family to go to university and to take advantage of the freedom that the 1970s gave to newly emancipated women at that time.

And we meet Elsie born in 1936, into a very working class family and despite the advancement of years still holds very traditional views on life and women and their place in the world.

This is a play set in the here and now focusing on the lives of these women who are drawn together due to Gilly’s ill-health.

After moving back home Frankie discovers a box full of old letters and cards addressed to her which have been kept from her by her mother. Some of these are very recent and Frankie questions why her mother would choose to hide them from her when she has insisted for all of her life that her grandmother was dead.

There then ensues a search by Frankie to contact her grandmother predominantly to tell her of her mother’s ill-health in the hope that she may be a medical match for her mother and might help with her recovery.

This is where the set is simplistically effective. The boxes are quickly and easily moved and shifted to create living rooms and outdoor spaces to allow each of the characters to tell their stories.

What resonates from the performances is that Elsie is a dyed in the wool traditionalist, having been brought up to fear the wrath of the church and to seek to avoid a social stigma by meeting a boy, falling in love, marrying and then having a baby. Anything out of that order is wholly unacceptable.

Which probably explains why Gilly appears as a bitter middle-aged, dying woman with a steadfast refusal to have anything to do with the woman who brought her up irrespective of whether or not her mother could be a medical match to fight her cancer. Gilly did not take the path chosen by her mother and the play jumps backwards and forwards in time, showing how Gilly went to university, became pregnant and Elsie’s reaction to that event.

Given today’s attitudes to out of wedlock pregnancy, it is doubtful that Gilly would ever have had such a hard time had she became pregnant today.

And given all her moralising and lifelong aim to avoid social stigma, Elsie has secrets of her own which unfold throughout the play.

A strong performance by all the actresses on an emotive subject. Despite the nature of the subject, the play manages to be extremely funny.

The play was inspired by real experiences shared by women around the UK who were invited to answer questions about the challenges they faced in their lives and the best advice their mother had given them.

This is how the play starts and ends with these nuggets of advice being called out, some of which resonate greatly with the audience, such as “always wear clean knickers, just in case you get run over.”