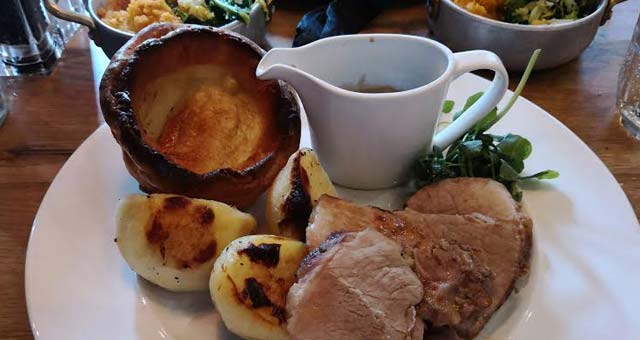 You may remember that this site opened in March 2011.  It was formerly owned by Paul Heathcote and was a Spanish concept called Grado which has been led by the same General Manager, Gosia Everett, who, with her core team, has maintained the standard originally set and which quickly became a firm favourite with the LGBT community with the Gay Village just a couple of streets away.

So when Blackhouse on New York St (formerly Grill on), recently introduced a new Sunday Roast menu we (friend Paul and I) were keen to try.

On arrival, a couple of pre-lunch drinks were served and consumed on the small outdoor terrace at the entrance to the venue.Despite being a lovely day, the blustery breeze forced us indoors and our lunch experience began.

Lucky enough to be seated on the raised area in one of the private booths,  we were both given plenty of time to finish our drinks and busily perused the menu.

We both chose the Smoked haddock with poached egg as our starters with its nice runny egg which went very went well with the fish and spinach. The accompaning bread wafers were good to mop up the sauce.

Not a drop was left.Delicious.

My friend chose the Roast pork Sunday lunch, which was generously served and a nice selection of vegetables and plenty of them too. Extra gravy was provided on request.

I opted for the Chicken (have never been a fan of Pork),with the same vegetables and as mentioned, more gravy.All very tasty and the gravy helped to moisten the meat as we know Chicken can be a little on the dry side even when properly cooked, which mine was.

Then for dessert we had 1 Apple crumble which was big enough for two to share without feeling deprived.2 boats of lovely custard were delivered and greedily devoured.

I had the Orange Crème brûlée. Beautifully prepared and tasty.Could have eaten another straight away.But didn't.

All this was accompanied by a light a very quaffable Grenache Rose at £19 didn't hurt the pocket too much either.

Service was very friendly and efficient with the lovely Tom and Mille in attendance. There when needed, but NOT topping up wine too frequently in the hope of a second to follow.

Full marks and a re-visit is planned soon and remember it is 20% off food Sun-Wed at all times.

Meanwhile, check out their menus here.