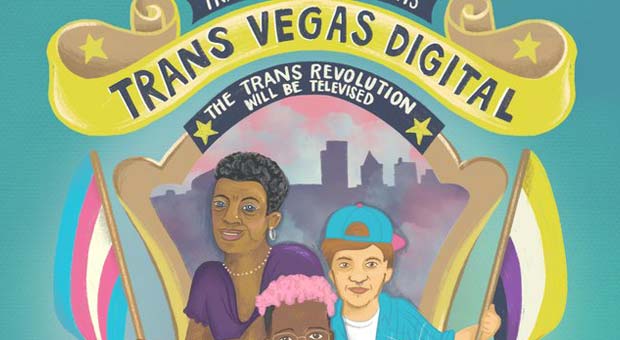 We are delighted to announce that this June (19th - 21st) will see the fourth annual Trans Vegas arts festival in Manchester. In the light of the COVID-19 lockdown the festival will, for the first time, run as a digital event online.

Curated by Trans Creative, Trans Vegas is an annual trans arts festival where trans people get to tell their own stories.  Over the last 3 years, the festival has devised, curated and supported work from hundreds of trans and non-binary artists from diverse backgrounds and disciplines.

The festival delivers an exciting programme of new and original work curated by the Trans Creative team with support from Arts Council England, Manchester Pride and Manchester City Council

The programme will include films, Q&As, interviews, an online art exhibition, a podcast and a virtual rally - all created by trans artists during the COVID-19 lockdown.

Trans Up North will shine the spotlight on the north of England with four short films created by northern trans artists. The screening will be followed by a Q&A.

La John Joseph is a Liverpudlian artist, they work at the intersection of artist film and live performance, investigating the convergence of social class, gender identity and religious faith in the matrices of social power.

Sade Mica uses photography, textiles, print and film alongside other mediums to document their body, emotions, ever in flux gender presentation. This piece is about binders that Sade has made to be worn on the outside.

Chester Tennyson’s work deals with the absurdity present within the everyday language of institutional order and authority. As a transgender artist, the language of gendering is a key focus for Chester and his practice plays with the idiosyncratic cisgender norms and patriarchal rules present within everyday life.

Yvy DeLuca is a trans advocate and author of 'Tainted Beauty - The Memoir of an Authentic Creation'. As a trans, Indian woman, Yvy also performs as a BollyWitch, incorporating Bollywood dance and the mystic world.

Been There, Done That... An intergenerational project hosted by trans artists to celebrate the trans legends that came before them, in response to how our elders have been seen and treated during this pandemic.

The work sees four trans icons being interviewed by younger members of the trans community including:

Campbell X, award-winning film maker whose films centre, gender non-conforming, transgender, and Queer People of Color will be interviewed by Melz a writer/artist and academic.

Bonded – Legendary, international Trans performer and pioneer Justin Vivian Bond presents five short films looking at how the lockdown  has bonded  us in trauma and in our own homes. JVB will be reflecting on their life and career culminating in a musical performance from their fabulous House of Whimsy.

This exhibition will include interviews of some of the international artists.

A Rallying Cry - a five minute film with spoken word and music contributions from trans artists and the trans community. It will be a call to arms and a response to Liz Truss’s shocking plan to remove healthcare for young trans people   and policing same sex spaces forming the centre piece of a digital rally on 20th June. There is a call out on social media and people can get involved via https://transcreative.uk/submissions

100 Trans Voices - An audio podcast of contributions from many members of the trans community, collected over the last year and including reflections on some of their lockdown experiences.

Kate O’Donnell, artistic director for Trans Creative said; “125 zoom calls later, we managed to contact trans artists around the world, meet them in their homes during this lock down and create the UK's first online trans arts festival. Having my trans creatives with me during this difficult time has been special and i am so proud to share what we have made together with you.”

Mark Fletcher, chief executive for Manchester Pride, said; “I am really excited to be able to work with Trans Creative to bring this vital and engaging festival online. Each year it enables our trans family to share its many talents and voices to the wider LGBTQ+ people of Greater Manchester and by taking the 2020 festival online I hope that we are able to reach an even bigger audience regionally, nationally and internationally.”

Carl Austin Behan, LGBT advisor to the Mayor of Manchester said; “Pushing boundaries and celebrating differences, the way Trans Vegas does this is fantastic.”

“It’s really exciting to have a space to be an out Trans person and to know that that’s what’s being celebrated,” Adyn Quinn Davis, Trans Creative Associate Producer.

“We have to tell our stories in order for the world to change, to bring prejudice to an end” - Jo Clifford, playwright and Trans Vegas performer.

The festival has a strong commitment to supporting trans people throughout and has actively sort out trans technicians, producers, marketing experts and designers; mostly based in the North West. Visuals for the festival have been created by trans illustrator Jamie Neville, the digital producer is Alex Hewitt, web designer is Danni Thompson, marketing strategist Campbell x, producer for the Trans Rally Adyn Quinn-Davis and the sound engineer is Eliyana Evans.

For more information click the full story link below