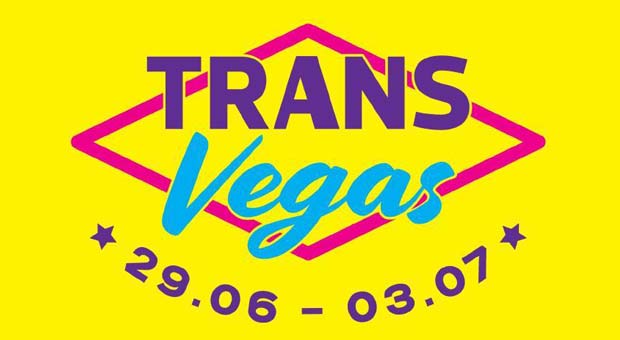 Transgender arts festival returns to Manchester for its second year, raising trans visibility and fighting transphobia with fabulous art events across the city.

The festival is curated by Artistic Director of Trans Creative, Kate O’Donnell, herself an international performer, writer and curator.

Kate established Trans Creative two years ago to raise trans visibility and fight transphobia through arts and education. Kate was recently seen across Manchester as part of the ‘Strong Women’ campaign, and is well known in the city for her own work in theatre and her groundbreaking role in ‘Twelfth Night’ at Royal Exchange Theatre.

Trans Vegas 2019 offers a programme of ground-breaking transgender art, performance and conversation in the finest venues across Manchester. The festival is entirely delivered by members of the trans community, and the world-class work has something on offer for audiences from every walk of life.

“We wanted to hear twice as many trans voices at this year’s festival, we want to hear them roar and raise everyone's trans spirits. Brace yourself Manchester, Trans Vegas is coming!”

"We're pleased to once again be supporting Transvegas and helping to introduce LGBT+ people across Greater Manchester to this innovative and compelling festival. It takes place over the weekend of the 50th anniversary of the Stonewall Rebellion and what better way to mark how far we have come than with this exciting programme which is packed full of talented Trans voices."

Trans Vegas takes place from 29 June–3 July, coinciding with the 50th anniversary of the Stonewall Rebellion, in which transgender and gender non-conforming people played a crucial role in resisting police violence and discrimination. Trans Vegas itself picks up this torch by supporting the most marginalised members of the trans community to tell their own stories.

The festival launch takes the form of a sensational club-night / performance party with The Cocoa Butter Club, London’s LGBTQIA people of colour cabaret. To honour Marsha P. Johnson and the trans women of colour who were a crucial part of the Stonewall uprising, this will be spirited soiree of burlesque, spoken word, vogueing and DJs centring trans and non-binary performers of colour, with London’s legendary Miss Kimberley and friends.

Trans Creative at the Movies, with BFI

A panel of well-known transgender guests will ‘trans up’ mainstream cinema history by revisiting films from unique trans perspectives, followed by a selection of new short films from BFI Flare. Guests Juno Roche, Kimberley Clark and Victoria Gigante discuss their cinematic pleasures for your pleasure. Presented in partnership with BFI Flare.

The main theatre space at the iconic Royal Exchange Theatre will host 100 trans people in a truly unique large-scale event, with the theme of ‘Telling our own stories’. Bringing together trans artists and community members – with stories taking place both on and off stage – the event will showcase a huge range of voices to show the breadth and diversity of the trans community. Artists include Kate O’Donnell, Jo Clifford (‘Jesus Queen of Heaven’), Jason Barker (‘A Deal With The Universe’), Krishna Ishta, Jamie Hale and a sound track Video Jam Special from Eliyana Evans. Includes new commissions, premieres and scratch work from high-profile artists.

Join trans men and trans masculine people in a frank, lively and educational discussion of their diverse experiences of masculinity, feminism and identity, inspired by the unique couture fashion collection at Manchester Art Gallery, which will form a backdrop to this unique conversation. Chaired by EJ Scott, curator of the Museum of Transology, with contributions from artist Jamie Hale, Zorian Clayton of BFI, and Manchester pop artist, HUSK.

“Why can't men wear what they want, how does this link to trans rights being a struggle for equal rights for all genders, and how this is informed by our lived experiences?”

Kate O’Donnell hosts an evening of creativity and well-being, an opportunity to relax and nurture your spirit, including yoga, singing and conversation in a relaxed friendly setting. Take time to embrace and celebrate yourself in a safe and inclusive space. This event is for transgender and non-binary people only and is free and un-ticketed.

Stand By Your Trans

Taking its name from the iconic #StandByYourTrans campaign, we bring you a heady cocktail of curated live performance and open-mic by talented trans people and their allies, designed to lift the spirits of the trans community! Music, comedy, poetry and the unexpected combine to sign off Trans Vegas 2019 with some creative love for our transgender communities. Dust off that performance piece and join in!