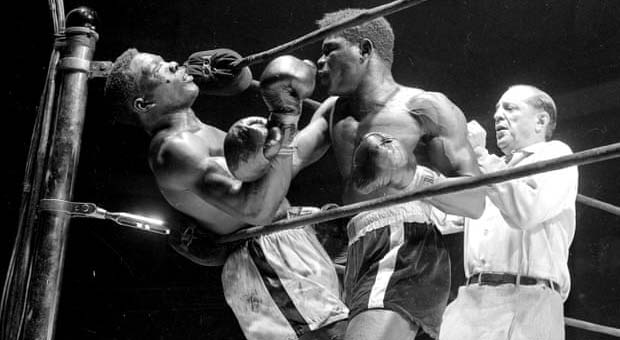 The True Story of Emile Griffith

We are delighted to share the news of a brand new book which tells the story of Emile Griffith.

KNOCK OUT! The True Story of Emile Griffith “I keep thinking how strange it is. I kill a man, and most people understand and forgive me. However, I love a man, and many say this makes me an evil person.

To so many people, this is an unforgivable sin.” – Emile Griffith, 2008. In Knock Out!, award-winning German graphic novelist Reinhard Kleist draws a powerful, emotive portrait of a bisexual Black athlete who, facing racism and homophobia in 1960s America, found success in the world of boxing.

US boxing champion Emile Griffith gained notoriety in 1962 when he brutally defeated the Cuban fighter Benny Paret to win the world welterweight title. Ten days after the fight, Paret, who had directed a homophobic slur at Griffith during the weigh-in, died from his injuries. It was a pivotal moment for one of the greatest boxers ever to step into the ring.

A flamboyant, irrepressible character who was also a singer, a dancer and a talented hat designer, Griffith’s private life was an open secret… until it wasn’t. As Jonathan W. Gray, Associate Professor of English at John Jay College of Criminal Justice, City University of New York, writes in his foreword to the book: “Griffith somehow represented both the nobility and the tragedy encapsulated in the phrase ‘he was ahead of his time’ while at the same time transcending the strictures of that cliché.”

Beautifully rendered in Kleist’s fluid and at times stark black-and-white style, Knock Out! is the story of a fierce and ambitious fighter, and of a knock-out blow that ended one life and changed a second forever. ABOUT THE AUTHOR Reinhard Kleist lives and works as a freelance comics artist and illustrator in Berlin.

His international breakthrough graphic novel Johnny Cash: I See A Darkness was nominated for the Eisner and Harvey Awards and received the Max und Moritz Prize for Best German-language Comic. With The Boxer, he became the first cartoonist to receive the German Youth Literature Prize. Kleist’s other books include Castro, Nick Cave: Mercy on Me and An Olympic Dream, all of which are also published in English by SelfMadeHero.

More details and to buy