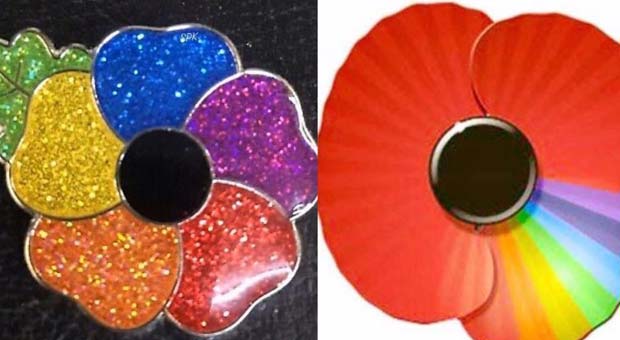 The Pride Poppy or variations upon the pride poppy are once again doing the rounds on social media in the lead up to Remembrance Sunday. The pride poppy was originally designed by Doncaster Pride last year as a way to remember the contributions of LGBT people during this country’s war effort. The idea was promptly attacked by all sides and rapidly prompted homophobic abuse from those offended by the hijacking of the century old symbol.

That kind of abuse is never acceptable nor justified but one has to question what was the need for the creation of the rainbow Poppy in the first place? The regular red poppy represents all those who lost their lives during active service from World War One up until the present day. The Poppy is naturally red where it occurs and the Poppy appeal has raised over £50 million for members of the armed forces and their families regardless of whether they’re LGBT or not.

I can sympathise with why people have used the rainbow poppy but it is really unnecessary and helps to further segregate the LGBT community. The contributions of LGBT people may well have been under valued in the past and gay people may well have been under appreciated by the Poppy can come to represent all people as it stands. We all bleed the same blood and the red Poppy can be a symbol for everyone.

There are other versions of the Poppy including the purple poppy and the white poppy which represent different things including the animals of war and pacifism. The red poppy is there to represent people of all colours, genders and orientations.

The rainbow poppy fulfils no purpose other than to divide us from society. Agreed?

Tell us what you think via Canalstmanchester@gmail.com