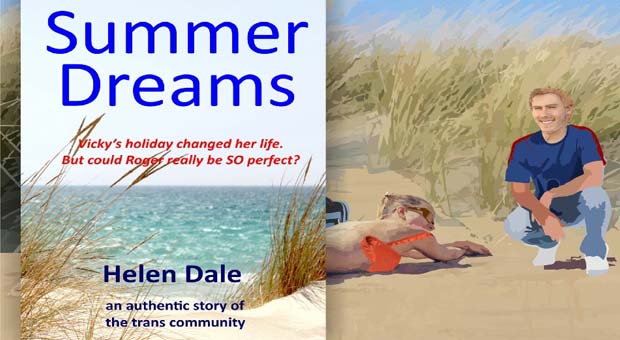 Many of the instances are based on real life and illustrate the wide range of trans people’s experiences, the problems, prejudices and fears that they face (and some of their own prejudices) — and the fact that being trans is just one facet of their lives.

But let Vicky tell you about Summer Dreams:

I was David, but now I’m Vicky.

I was sunbathing in sand dunes near Bournemouth in 2003, when Roger found me and changed my life.   After spending a heavenly holiday with him as Vicky, I just couldn’t face reverting to David.  I knew, though, that becoming Vicky permanently was impossible.  There was only one option, I tried to kill myself.

Roger saved me then showed how life as Vicky was possible.

Summer Dreams tells of my transition journey, the diagnosis by a shrink, medical treatment, surgery and recovery afterwards.  My journey includes coming out to family and friends and their reactions, some of which were very difficult to deal with, especially Peter my twin brother’s and the abuse we faced from him and others.

But being trans is just part of who I am.  I have a normal life too and it tells how our relationship developed, our work together, sailing trips and other excursions, a rescue at sea; our wedding and nearly disastrous honeymoon and our plans for the future including starting a family through surrogacy.

Having been asked to befriend Mia, a young trans prisoner, held in a male prison in spite of having lived as female for two years, I visited her and learned of her horrendous story, losing her mother to cancer; an affair with her step-father, who is prosecuted for rape as Mia was under age when the affair started and abuse by her birth father; having sex with men for money and being imprisoned for supplying clients with drugs.  As a result of this I became involved in training prison staff on trans issues with the help of Michaela an older activist who works for the Probation Service.

You also meet other transwomen and their various experiences:

• Karen, a young member of the support group in Bournemouth, who is attacked;

• Jacqui an older transwoman who is ex-special forces and deals with Karen’s assailant;

• Laura, a post-op transwoman desperate for a man to take her post-surgery virginity;

• Theresa, who struggles with identifying as trans and feels guilty about feeling a fraud;

• And Marilyn — whom we could have done without.

Inevitably, the abuse and other transphobic messages I’ve experienced took their toll and I’ve always feared that any good times would soon end and I’d be left with nothing.  It was no surprise, therefore, when I started to suspect that Roger and Mia were having an affair.  Unable to face being left on my own, I returned to the sand dunes where Roger and I had met and where I’d tried to take my life before and prepared to finish the job this time.

I decide, instead, to fight for Roger.