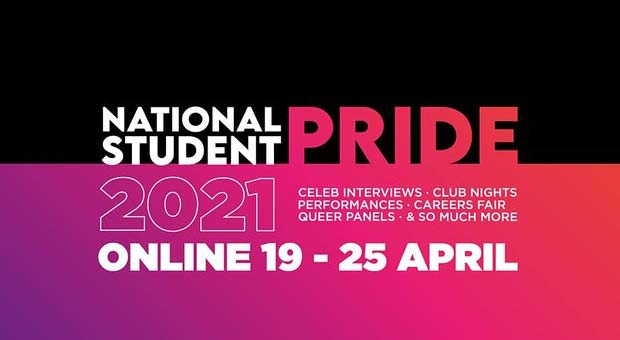 For a whole week this April, National Student Pride are serving you hands, face and queer space with an incredible roster of online events for LGBTQ+ students. We’re here to be your digital pit stop for topical panel discussions, queer game shows and the UK’s largest LGBTQ+ careers fair.

A safe space for LGBTQ+ students and young people

National Student Pride is debuting a totally digital format for 2021, tackling 4 main themes as part of a week-long event:

Mental Health with a focus on loneliness and isolation, in association with Attitude Magazine - Monday 19th April

These are extremely important issues within the community, and our festival will host a raft of informative and exciting content covering many different topics and aspects of them.

Magazine shows are a staple of life in the UK, and we're bringing you one with an LGBTQ+ twist - This Evening! Hosted by broadcaster Nick Grimshaw and his best friend, Creative Director, DJ and stylist Aimee Phillips - on Wednesday 21st April we'll be bringing you a smorgasbord of entertainment and education. We'll try to solve your problems, help you cook, jusz up your fashion and serve exquisite art, all packaged in a hugely entertaining hour.

In association with Attitude magazine, and hosted by it’s editor, Cliff Joannou, National Student Pride remains committed to staying at the forefront of national conversation by tackling one of the hardest of them all - mental health. In a year that has taken its toll on everyone’s mental wellbeing, with the rise of loneliness and isolation disproportionately affecting young LGBT+ people, this high-profile panel will delve into experiences, knowledge and research about mental health in the post-pandemic world.

In these final days of lockdown, we’re bringing you the boss level of online quizzes. Come and join Lorraine Kelly as she hosts an irreverent celebration of British pop culture. Who famously sang 'Cher Lloyd by Cher Lloyd'? Who has 'all the grace of a reversing dump truck'? This is the show where we celebrate the offbeat icons of recent history. Hosted by television royalty Lorraine Kelly, who will be joined by team captains Lawrence Chaney, the recently crowned winner of RuPaul’s Drag Race UK, and Tia Kofi, fellow Drag Race UK castmate and the breakout comedy star of the season. Joining Team Lawrence and Team Tia will be comedian, actress and writer Suzi Ruffell, and author and activist Charlie Craggs - with more contestants to be announced. This is one game show you won't want to miss!

Ahead of the launch of her debut novel, What It Feels Like For A Girl, Paris Lees sits down at National Student Pride for a conversation about the writing process, mental health, and her career as a journalist, presenter, and Vogue columnist.

Unflinching, hilarious and heart-breaking, What It Feels Like For a Girl is the unique, hotly-anticipated and addictively-readable debut from our National Student Pride ambassador.

Other highlights of the festival include:

Mental Health: In conversation with Cherry Valentine. National Student Pride meet with mental health nurse and star of RuPaul’s Drag Race UK Cherry Valentine and discuss the impact of the pandemic on mental health services, the challenges young LGBTQ+ people can face with their mental health and offering advice on what services are available to them.

Our Black Lives Matter panel discussion will be hosted by the co-founder of UK Black Pride, Lady Phyll Opoku-Gyimah.

Clifford Chance presents a Voguing workshop with the Father of the UK House of Revlon, Jay Jay Revlon, a leading authority of Ballroom in the UK.

Filming of the four themed panel debates, This Evening and Cheers, Queers! will be taking place at G-A-Y Heaven in central London.

National Student Pride is powered by Hopin, a world leading events platform which will host our week long festival - a Main Stage featuring our amazing debates, wellbeing events and entertainment, an Exhibition area hosting 50+ huge organisations at our Careers Fair and a networking area for attendees to connect with other LGBTQ+ students from across the UK.

National Student Pride are delighted to announce the return of headline sponsors, Clifford Chance and EY, huge supporters of NSP who ensure that our event remains as accessible as ever

“Clifford Chance could not be more proud to be a Headline sponsor and decade long supporter of National Student Pride, providing so much opportunity to young LGBTQ+ people across the UK. Allowing young people to be their authentic selves in all aspects of their lives will always be a priority for us, one of the reasons why we fully support the event. What an incredible lineup to launch the online platform for National Student Pride 2021 - we can't wait!”

“EY is proud to be headline sponsor of the 2021 National Student Pride. Now more than ever, it’s important that business and society at large are places where everyone feels they belong. We're really looking forward to meeting LGBTQ+ students from across the UK during the festival and the exciting line-up of speakers and workshops.”

For sixteen years, National Student Pride has brought a vibrant mix of celebrity interviews, graduate careers fairs, conferences, debates, parties, and workshops to over 1,800 students each year from 200+ global universities at a weekend-long festival in London.

This year, the largest LGBT+ student event in the UK is returning in an exciting digital format to accommodate for COVID-19 restrictions in the UK.

National Student Pride’s mission is to be an inclusive platform at the forefront of debate in discussing the challenges facing our community, while providing unmissable opportunities to make the most of a designated space for LGBTQ+ students and recent graduates.

We’re happy to say this openly - we’re living through a huge historical juncture, and we know LGBTQ+ people are facing particular hardships right now. Keep a lookout for announcements on who will be joining National Student Pride in our new digital format, because there is no doubt our 2021 event is going to animate some crucial conversation at a time when we all need to talk.

The event began at Oxford Brookes University in 2005 as a response to the Christian Union’s ‘Homosexuality and the Bible’ talk. Student Pride continues this mantra in its 16th year, continuing to uphold our ethos of opportunity and accessibility for all LGBTQ+ students and young people.

Tickets are available now, please do support the event by including a link in any coverage via READ MORE below.