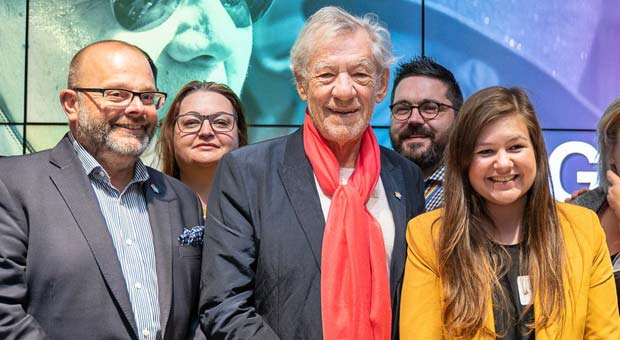 LGBT Foundation were joined by legendary actor Sir Ian McKellen and other honoured attendees at a very special event to launch their newest programme of work – Pride in Ageing.

Pride in Ageing will work to end the inequalities faced by lesbian, gay, bisexual and trans people over 50 in Greater Manchester and ensure that they have access to inclusive housing and care later in life.  The programme will also tackle the social isolation faced by LGBT people over 50 in the UK, which we know is commonplace and has a significant impact on their health, happiness and wellbeing.

It will also celebrate the positive aspects of being an LGBT person in mid-to-later life in our city-region, bringing people together to share their stories and experiences, and building a community of active and empowered LGBT people.

Many LGBT people over 50 have grown up in a world hostile to their identities. Some will have come of age before the partial decriminalisation of homosexuality in 1967, and may have experienced significant discrimination and prejudice in their lifetimes. Attendees at the event will also hear from the experiences of some LGBT people over 50 and some of the challenges they have faced.

“No one is born with prejudice, it’s something you learn.

Growing up, even in Lancashire, what is now Greater Manchester, 70 years ago, it was a total silence. There was no mention of sexuality other than heterosexuality at school, on the radio, in church. Absolute silence. So is it any wonder that people who are older, when things are hazy, they may think back to a time when things were different?

Waving the banner for full and total equality, and love, is something that has my total support.”