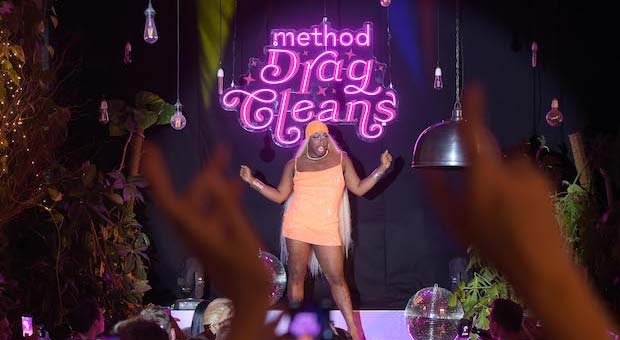 A  new campaign is set to shake up the category by featuring an array of Drag Queens, a Drag King and a Queer Queen on over 150 digital billboards across London. Hot on the heels of ASA’s recent ban on harmful gender stereotypes featured in advertising, the Drag Cleans creative subverts the outdated, ‘traditional’ stereotypes that have been associated with cleaning for so many years.

The seven hero images showcase method’s love of colour, creativity and individuality, all of which are synonymous with the drag community. The stylised shots see the performers adopt a drag persona inspired by a hero product in the brand’s core range, to prove that cleaning doesn’t have to be a drag, and that you can be both loud and house-proud:

The out-of-home campaign follows on from the brands experiential and PR push, which launched in early August and marked the start of the year long partnership with LGBT Foundation. The Drag Cleans event featured fabulous performances over two nights, with all talent taking to the stage to deliver a show-stopping, cleaning-inspired lip-sink routine. Attendees included Nick Grimshaw, Laura Whitmore, Munroe Bergdorf, Oliver Proudlock and Daisy Lowe, with ticket proceeds going to LGBT Foundation.

Over the next 12 months, method will be funding LGBT Foundation’s entire volunteering programme, helping to provide support across a number of projects championing the charity’s #EqualityWins activity – which exists to help ensure a safe, healthy and equal future for all LGBTQIA people.

Read more about the campaign via the link below