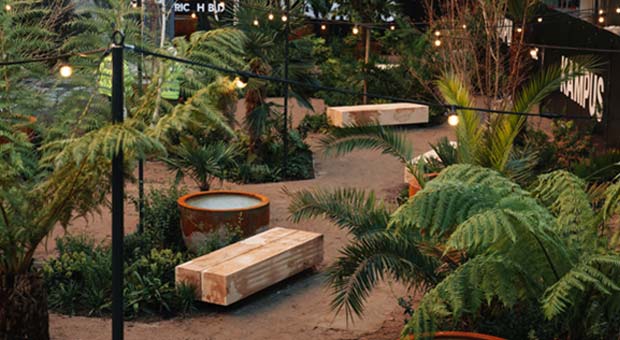 The recently completed secret garden at KAMPUS has been revealed in new images. The jungle like garden sits at the heart of the new £250m neighbourhood being developed by CAPITAL&CENTRIC and HBD.

Located in the centre of Manchester near Canal Street, the garden neighbourhood will provide a new oasis which will be open to everyone to enjoy from next year. With lush greenery and towering trees the garden will bring a new green hangout space to the city.

Ahead of residents and occupiers arriving in Spring 2020, the garden is open to the public for the next few weeks as KAMPUS hosts a temporary ‘alternative’ Christmas market. Visitors to STALL, by Manchester’s legendary independent street food festival GRUB, will be able to get a first look of the new neighbourhood and experience the garden first-hand.

Sat alongside the Rochdale Canal the garden is surrounded by twenty commercial spaces, which will be filled with independent bars, restaurants, cafes and shops, and over 500 apartments. Designed by Exterior Architecture the garden features many tropical looking palms, ferns and trees with over 30 species.

“If you live in a city centre apartment you don’t often have the luxury of a garden. KAMPUS will change that becoming Manchester’s first garden neighbourhood. It’s hidden away at the centre of KAMPUS so you almost stumble across it, but the garden will be there for anyone to use whether you live there or not.

“We’re not talking about a bit of uninspiring grass that’ll just end up looking tired and drab. We’ve got tree ferns and palms, so it’s got a tropical feel. I can’t think of anywhere else like it in the city centre. Even though it’s winter we’ve chosen plants and trees that are lush and green – just imagine how awesome it’s going to look next summer in full bloom!”

The garden is just one of many outside spaces at KAMPUS with a south facing square off Chorlton Street and Little David Street, a cobbled street closed off for decades which will be restored as a cafe-lined alley, with outdoor seating.

Located on Aytoun Street, KAMPUS is transforming the former Manchester Metropolitan University site into 533 apartments in two new blocks, two listed Victorian warehouses and the existing brutalist 60s tower. The project is due to complete in 2020, with the first residents due to arrive in Spring.

STALL runs every Friday, Saturday and Sunday until 22nd December at KAMPUS on Aytoun Street, Manchester. The event is free entry, no tickets are needed and everyone, including families and dogs, are welcome. For more info visit the facebook page here or www.kampus-mcr.co.uk