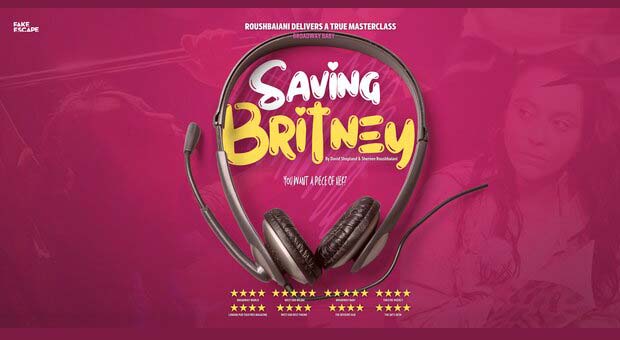 Saving Britney is Performed and co-devised by Shereen Roushbaiani | Written, directed and designed by David Shopland

Melding together the real-world events of Britney Spears’ turbulent life with the voice of a millennial superfan, Saving Britney explores the magnetic effect of pop stars, the problematic depiction of mental health in the media and the tricksy subject of how Britney was over- (or under-) protected by herconservatorship. The show takes its inspiration from the #FreeBritney movement and the public battle to get her conservatorship legally removed. It was first performed at the Old Red Lion in June 2021, when it reopened the Islington venue post-lockdown, and was nominated for Offie Awards for Best Lead Performance in a Play and Best Director (plays), and recently nominated for a Whatsonstage Award for Best Off-West End Production

Shereen Roushbaiani performs as Jean, a typical Millennial who grew up alongside the rise and fall of Britney Spears.Made for devotees of pop music who came of age in the 90s and early 00s, this nostalgic show is a gentle look at sexuality, celebrity worship and growing up, drawing on the performer’s own experiences of pansexuality.

Britney Spears was a star ofnational television at age seven. By sixteen, she was an international pop star known for dancing in her school uniform and looking every inch the All-American pop princess. But then something went wrong. At 25 years old, Britney was in a mental institution and images of a golden-haired superstar had been replaced in the popular imagination with a sad, shaved-head Britney.

David Shopland said “We're very excited to be taking Saving Britney out on the road and introducing the show to parts of the country that have yet to experience this 5 star, multi award nominated production. We hope people around the UK enjoy the 90s nostalgia, humour and social commentary as much as audiences in London and the South West have so far!"