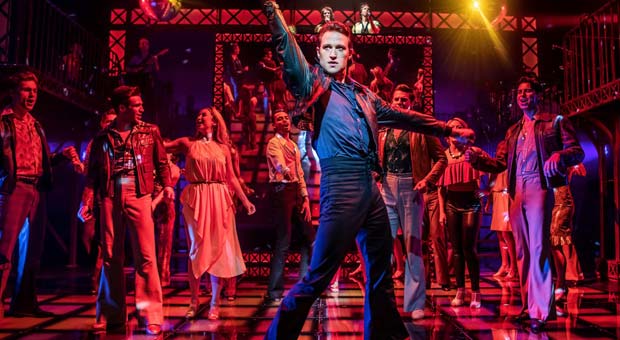 Richard Winsor, the celebrated principal dancer of Matthew Bourne’s Dorian Gray, Edward Scissorhands, Play Without Words and Swan Lake, will lead the cast in the role of Tony Manero. He will be joined by Olivia Fines as his dancing partner Stephanie. A feature of this new production will be the onstage appearance, high above the stage, of Jake Byrom, Oliver Thomson and James Hudson playing and singing the Bee Gees’ soundtrack.

Saturday Night Fever tells the story of Tony Manero and his reckless road to dancing success. The musical features the Bee Gees’ greatest hits including Stayin’ Alive, How Deep Is Your Love, Night Fever, Tragedy and More Than a Woman, with special permission for this production to use added Bee Gees songs including Too Much Heaven and Words.

The ‘70s classic Paramount/RSO movie based on the New York Magazine Article Tribal Rites of the New Saturday Night written by Nik Cohn in 1976 was an instant hit when it was released in cinemas. The album remains the best-selling movie soundtrack of all time.

Whilst paying homage to the movie, this musical revival promises more music and hot new choreography. The new production also specially features onstage actor-musicians in the roles of the Bee Gees, singing the hit soundtrack alongside a talented cast.

Bill Kenwright says, “When I first saw the film over forty years ago, like the rest of the world I was not only mesmerised by a terrific small budget movie, but also by the soundtrack. It was that feeling of being carried along by Maurice, Robin and Barry’s searing vocals and melodies that I wanted to feature in my theatre production, and which led to me include a live band on stage replicating that experience as well as we can.”

The production is produced and directed by Bill Kenwright, with choreography by Bill Deamer, design by Gary McCann, lighting by Nick Richings, and sound by Dan Samson. The stage adaptation is by Robert Stigwood in collaboration with Bill Oakes.

More details and to book via here.