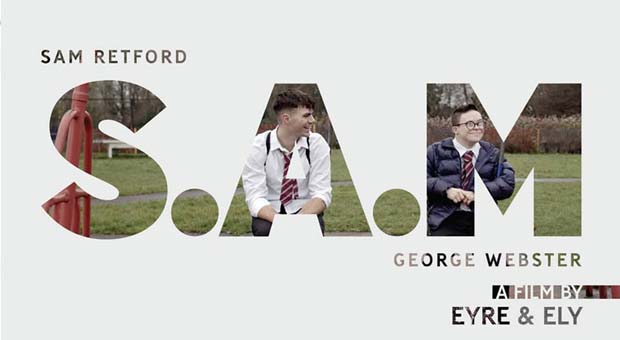 Upcoming actor George Webster, who has Down syndrome, takes the reins in furthering visibility by representing LGBTQ people with learning disabilities in new heart-warming short film.

ABOUT: S.A.M. was developed by writing and directing duo Eyre and Ely who have workshopped the storyline with young adults with learning disabilities.

“We wanted to develop a story that expressed how many people living with learning disabilities feel about love and sexuality. We found that many people felt like they didn’t have a voice when it came to expressing sexuality and were often seen as non-sexual. We hope this film will change people’s perceptions and give a platform to an issue that is rarely  discussed.”

The film is supported by MENCAP

SYNOPSIS : Two teenage boys both named Sam meet at the swings each week to escape their dysfunctional home lives and slowly fall in love.

The film deals with themes including how society treats people living with disabilities, stereotypes regarding sexuality and disability, as well as some of the issues faced by young people from disadvantaged and ‘broken’ families.