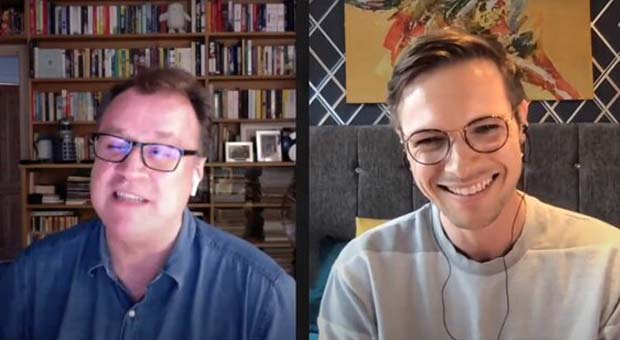 Russell’s dozens of writing credits and creations have tackled subjects such as sex work, desire, faith, death and the future with hour, heart and hanity, and much of his work has been set in Manchester.

In this interview when talking about Queer As Folk, Russell discusses how he had to be told to write about Canal Street and then realised he had been researching just that for years. He speaks of his love for the scene and the romance of it as a safe, gay space.

He said; “It's funny because I was actually asked to write it - sometimes it takes someone else to point out something really obvious to you! There's a woman called Katrina McKenzie at Channel4 who said ‘Why don't you write about that?’ Up until that point I didn't think it was possible to write about that and then I turned around and realized that I had 20 years of going out and clubbing and watching that scene. I had always loved going out on Canal Street, obviously but I love going out on my own. If I bumped into friends I used to say ‘oh go away!’ I would change clubs to be on my own. I realized afterwards it was like research - I used to stand at the railing of Cruz 101 and watch everyone dancing, and I’d be watching such a magical space. You're watching - even now today - a space that people escape to. You know, the heat and the light and the cigarette smoke and the noise, and you’re just watching people dancing thinking

“You're a bank clerk normally, you're in the closet, you can't be out to your mum and dad, you know, but you’ve come here and you are yourself.’  What a dramatic place!

“I genuinely love the romance of places like Canal Street. The romance of a gay space. It's a true romance, it's the drama in there - there's honesty and there's liberation. You are yourself and sometimes you’re not yourself you can go and be a completely different person. Sometimes you construct a self to go down there. I've always said I think it was a matter of time before someone would put that on screen, and a matter of time before a gay drama came along and I'm so glad it was me. Not everyone is, but I am! I remember after the first episode I went to Cruz 101 and the man at the desk said ‘That’s set us back 20 years!”

The conversation, which is live on You Tube now, touches on the political and cultural need to get LGBT+ lives on TV screens in that moment and the need for the rawness and honesty that gay life in real life was.  He also reveals that Tony Wood based Eileen's house, now home to Eileen and Queer As Folk star, Anthony Cotton, on Coronation Street on Hazel's house on Queer As Folk.

The interview is available to watch on the Manchester Pride YouTube channel here at READ MORE.