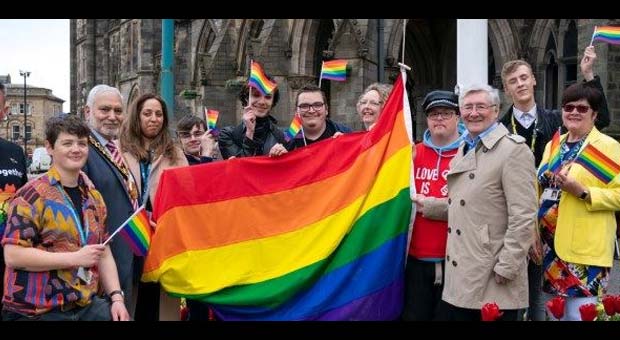 Rochdale in Rainbows (RIR), the Borough of Rochdale’s first ever official pride is now in full swing, with a variety of events taking place over this last fortnight of November (16th - 30th).

Planning began last Autumn for the event, initiated by Cllr Janet Emsley, Portfolio Holder of Neighbourhood, Community & Culture, who had been approached numerous times about establishing a pride celebration for the borough. Out of those discussions and meetings came Rochdale in Rainbows, a winter pride celebration which is the last in Greater Manchester for 2019, but certainly not least!

Speaking with Ellie Caddick, a member of the planning committee for RIR, the focus point for the team revolved around the question, “365 days a year, what is the experience of an LGBT person?”. It is with this in mind that they began reaching out to organisations such as The Proud Trust, LGBT Foundation, George House Trust and Manchester Pride to cultivate ideas on how to create an inclusive and entertaining pride event, whilst also engaging with health and public services to improve their knowledge and better serve LGBTQ+ individuals across the borough.

When asked about the work leading up to RIR, Ellie says, “There are a couple of us at the council who are doing it as our jobs, but there are people at other organisations, they’re not just doing it as their role in the organisation, they’re doing it in the evenings, weekends, volunteering. It’s really nice that we’ve kind of got that people power in Rochdale that people want to spend their own time doing it.”

The event kicked off last Saturday (16th) with a pride flag raising in Middleton’s Jubilee Park, followed by a magnificent performance in the evening of the critically acclaimed one-man show ‘First Time’, by Nathaniel Hall and Dibby Theatre at Touchstones in Rochdale Town Centre.

Looking through the rest of the RIR schedule, there are a number of youth-oriented events, which students from the Hopwood Hall colleges have been heavily involved in. The college, shortlisted for the Inclusive Top 50 Employers in 2018/19, has its own LGBTQ & Allies Student & Staff Network (@HopwoodPride) and prides itself on equality and diversity.

There is a special ‘queer collective night’ hosted by artists ‘boygirl’ and ‘All Hands on Deck’ who will be celebrating at Touchstones Rochdale on Saturday 23rd November, with both collectives taking to the decks, and also hosting an hour of open decks to give any women, trans and non-binary people the chance to DJ.

For young children, what’s better than Drag Queen storytime! Taking place at Littleborough Library on Friday 29th November, the event aims to capture the imagination and fun of the gender fluidity of childhood, while giving children a positive LGBT role model. The Nightbus will be reading I'm a Girl, written by Yasmeen Ismail.

Aside from the usual pride parties and theatre shows, RIR has included some unique events in its roster such as the ‘Open Table’ event hosted by St Clement’s Church last Sunday (17th), which welcomed “all LGBT+ people to an all-inclusive church service”, as well as RIR upcoming LGBT+ conference (21st), Parkrun (named Priderun) on the 23rd, and an event specifically for the borough’s Asian communities (26th).

Looking ahead, RIR will move into the warmer climate of July in 2020, specifically the first 2 weeks of the month, and every year for the foreseeable future. They hope that bringing the event into the Summer will improve the ability to host more outdoor events and connect to other celebrations going on across the region.

There are a bunch of other events, so please check out rochdale.gov.uk/rainbows for more information!

More about Rochdale Pride below.