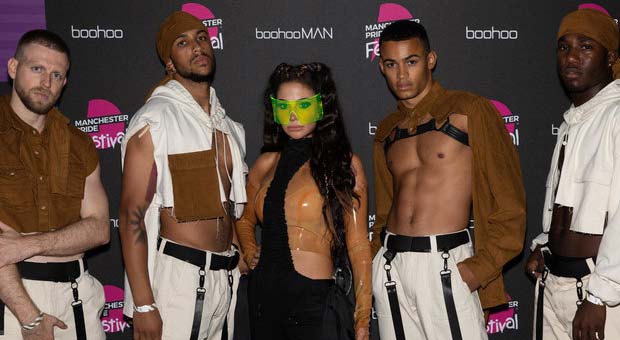 This Friday, Manchester Pride: Live In Your Living Room closes with more epic performances from its previous festivals, with sets this week from Four Of Diamonds, Tulisa and Jake Shears.

After three weekends of past performances from the LGBTQ+ charity, Manchester Pride has announced this fourth line-up for this Friday in its bid to improve life at home for LGBTQ+ people across the world.

This Friday, the stream on Manchester Pride’s YouTube channel will start at 8pm, and will be one of the first times viewers can watch Tulisa perform ‘Scream & Shout’. The song, which she wrote, was first released by will.i.am and Britney Spears in 2012. It was the biggest hit Britney Spears has had in over a decade, topping the charts in over 24 countries, and Tulisa triumphantly performed the hit in front of a Manchester Pride Festival Live audience of thousands at Mayfield last Summer.

The four weeks of past performances will be followed by four weeks of yet to be announced new content from the LGBTQ+ charity. Each night viewers will be encouraged to follow Manchester Pride’s social media channels for the chance to enter competitions to win festival tickets and merchandise.

Mark Fletcher, chief executive for Manchester Pride, said; “I want to take the opportunity to thank all of the amazing artists who have allowed us to show their performances as part of this series. It has reminded me what an exciting and vital part of our celebration of LGBTQ+ life the live music is and I have enjoyed the memories as much as the original events! We are thrilled to finish this series with an incredible performance from Jake Shears - a vocal, valued and supremely talented member of the LGBTQ+ community.”

“Whilst this activity is primarily about bringing joy to LGBTQ+ in their living rooms we are also asking that anyone who can support us with a donation does so.  We recognise that statistically, LGBTQ+ people are at much higher risk of experiencing poor mental health at a time like this and we are keen to keep our activity within our communities at the level it should be and the support of the many organisations and individuals who are often so generous is as invaluable as ever right now.”

Anyone who wants to donate to Manchester Pride can text MCRPRIDE to 70450 to donate £3.  Texts cost £3 plus one standard rate message and donors will be opting in to hear more about the charity’s work and fundraising via telephone and SMS. If they’d like to give £3 but do not wish to receive marketing communications, text MCRPRIDENOINFO to 70450.

Mark Fletcher, chief executive for Manchester Pride said; “I am saddened to see the world’s Pride events being cancelled as a result of COVID-19.  As CEO of Manchester Pride I must constantly balance the need for us as a charity to do the work we are committed to and keep my staff, our suppliers and those that attend our events safe. Right now we are having lots of conversations with Manchester City Council about how we can get through the situation with as little impact as possible.  As the situation develops, we’ll continue to be guided by the advice of health officials and the Government so that we can make the right decision for LGBTQ+ people and our city.

"As a charity which campaigns for LGBTQ+ equality all year round, we will continue our work online throughout the period of social distancing and we invite Greater Manchester to continue to support our cause. It’s vital that our conversations remain heard."