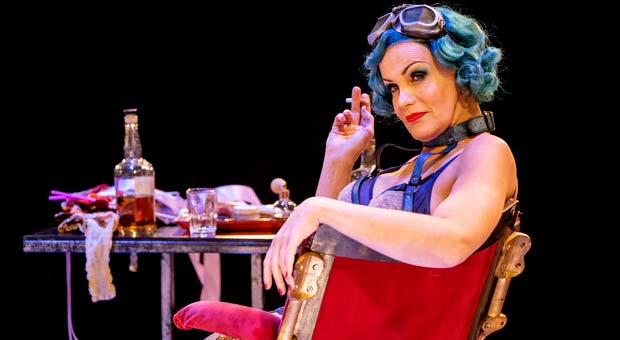 To mark International Women’s Day and create an homage to Woman who have influenced our present, and will continue to shape our future, the Royal Exchange Theatre has commissioned six Greater Manchester based artists to make six new pieces of work.

Eliyana Evans, Nana-Kofi Kufuor, Gemma Langford, Channique Sterling-Brown, Rebecca Swarray and Becky Wilkie will develop original audio experiences inspired by the extraordinary woman who mean something to them. Each artist will work closely with illustrator Hannah McClennan-Jones to create an accessible visual world for their audio experience. These commissions are a celebration of remarkable lives and quiet triumphs, of famous faces and family members, and will be shared across the theatre’s website and social media channels on Mon 8, Tue 10 & Fri 12 March.

A CONVERSATION WITH CHLOE by Rebecca Swarray is inspired by Manchester based queer and powerhouse activist Chloe Cousins. In this honest exploration Rebecca delves deep into topics such as activism, her role in Rainbow Noir, identity and her love of music and dancing.

Wrapped around the music of her childhood and adulthood and drawing on interviews with the women who have inspired her, including Audre Lorde and Jackie Kay, this is an honest conversation between two women of colour. In this audio experience Rebecca creates the space for Chloe to tell her story in a way that is true to her and most importantly in a way that is as vibrant and joyful as she really is. Rebecca Swarray is curator, founder and resident DJ Mix-Stress of the Manchester-based arts and events collective, RebeccaNeverBecky.

The collective curate and hold many events which specifically platform woman, QTIPOC, BAME and LGBT+ performers, artists, creatives and DJs. Creating a wide range of paid opportunities to showcase and spotlight talent and creativity.

Becky Wilkie creates IN HER OWN WORDS about artist Elizabeth Siddal. Elizabeth was a poet and a painter, but she is often talked about in relation to Dante Rossetti, her lover, or the Pre-Raphaelite brotherhood, many of whom she modelled for. Historically men have assigned her image to their paintings, her face to characters from other men’s stories. She has been Ophelia, Viola, Sabra, Beatrix, but in this piece sound and song are sculpted with Lizzie at the centre.

This time she doesn’t have to be ethereal and vacant, she can be angry and ugly and tired. A muse for a modern woman, on her own terms. Becky Wilkie is a Manchester-based musician, composer, songwriter and performer and one third of feminist theatre company RashDash. She also tours as a session musician and writes music for documentaries, films and other theatre projects. ‘Don’t Go Back To Sleep: The Lockdown Album’ is her most recent release.

Eliyana Evans celebrates the life of SOPHIE, an incomparable avant-garde pop music producer in her piece TRANSGRESSIVE. SOPHIE was a point of strength for so many in the Queer and Trans community; she was quite simply an icon. Her creative collaborations were far-reaching, including Arca, Rihanna, Kim Petras, Madonna and Charli XCX. Eliyana Evans is a Sound Designer, Composer and artist known as Eliyana; her piece will honour SOPHIE's extraordinary creativity and other revolutionary trans musicians such as Wendy Carlos and Jackie Shane.

A LETTER TO A MOTHER AND A SISTER is created by Nana-Kofi Kufuor and was inspired by his mum Ama Kufuor and his sister Mammy Maguire. It is a thank you from the writer to the women in his life who shaped him and sacrificed for him. It is an ode to all the women who have taken time out of their lives to help him become the man he is today.

The trials and tribulations he saw growing up and the lessons they taught him and others around him. Nana-Kofi Kufuor is a playwright of Ghanaian origin from Stockport. Kofi’s work is based on his interpretation of the society we live in. He is currently working in a Sky writers’ room and has a play with Red Ladder which will be staged in 2021 November.

Channique Sterling-Brown has been inspired by the incredible life of Mary Seacole, a Jamaican nurse  and businesswoman who travelled the world healing and offered to serve in the Crimean war. Only to be rejected for the colour of her skin. Though she is known to be a contemporary of Florence Nightingale, it was only in 2016 that a statue was erected to honour Mary, the first bronze statue of a named black woman in the UK.

Writer Gemma Langford’s piece takes inspiration from her Nan, Ida, THE LAST CUNNING WOMAN OF TIMPERLEY. Cunning Woman: A village witch or healer who provided remedies and divination. “Cunning”, from the Old English term kenning, meaning “wise”. She lives on in memory in many forms, depending on who you ask. But many would agree, magic ran through her. Sharing stories and memories this is a beautiful celebration of a woman who helped to heal in more ways than one. Gemma Langford’s work has appeared at theatres including Theatre503, The National Theatre Studio, Southwark Playhouse, 53Two and Hope Mill. She also writes radio plays with Big Finish for series such as Dr Who and Avengers. As a Video Games writer, Gemma's work with Ghost Town Games saw her become a Bafta Breakthrough Brit.

Hannah Mclennan-Jones is an Illustrator from Manchester. She creates vibrant pieces of illustration using pen and ink drawings, which are then collaged together to create her final pieces. Her work follows a strict pink colour palette and is inspired by punk aesthetics, pop culture, neon lights & nostalgia. She will be working closely with the six commissioned artists to illustrate their audio pieces.

Sound Designer Annie May Fletcher will be working with Gemma, Channique and Nana-Kofi to develop their pieces. Annie is a sound designer and composer for live theatre and digital media based in the North, and she trained at LAMDA. She co-founded Broken Bird Studios, a Northern-based audio production company, is an Associate Artist with Snapper Theatre and was the NST Lab Associate in 2018/19. Her recent digital credits include What A Carve Up, Toast and The Understudy for The LBT, and A Passion Play for 45North.

“Too often we only hear stories about the ‘fight’ to get the achievements of woman recognised - in history, in the workplace, in society. With OH WOMAN we wanted to give artists from Greater Manchester the opportunity to celebrate, shout about, honour and pay tribute to womxn who have had an impact on them. We were overwhelmed by the applications we received, the energy and passion that came across was incredible, from pieces about pop stars, grandmothers, painters, actors and activists – the respect for their subjects was palpable. The artists creating the work we have commissioned identified some truly exceptional women, whose stories are uplifting, both personal and universal and uniquely different from each other. We hope this collection of audio experiences are as inspiring to you as they were to us, we cannot wait to share them with you.”

Released on 8, 10 & 12 March from 6pm Free - on the Royal Exchange website and social media channels.

OH WOMAN can be found on the website and on the Theatre’s social media channels and will be available until 31 March.