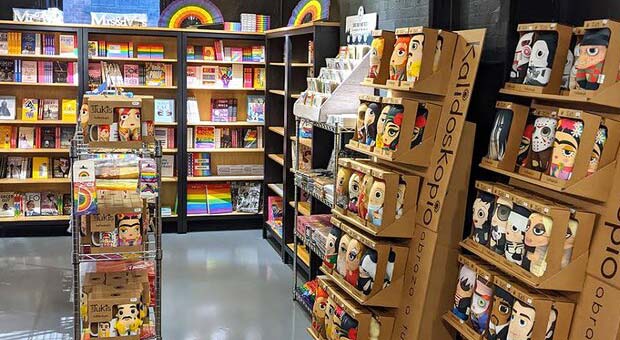 The UK’s largest LGBTQ+ shop has expanded again, taking advantage of lockdown to knock down walls and build an entirely new section to their store.

Situated on the second floor of Afflecks in the city centre of Manchester, Gay Pride Shop launched back in 2016 and has grown to now stock over 3500 LGBTQ and rainbow themed items.

This most recent expansion to the shop now sees them add the following ranges:

● An LGBTQ bookshop area. This already has 450 LGBTQ books in stock, with a further 400 more due in stock by the end of January. The books include everything from LGBT biographies and history books, to gender & equality books for children and fiction from LGBTQ authors or featuring LGBTQ characters.

● An expansion of their LGBTQ greetings cards, to bring the total to 850, from same sex wedding cards, to LGBTQ flag cards for birthdays, anniversaries or Christmas.

● A brand new range of TUKI products, which includes hand made cushions, water bottles and fridge magnets featuring famous LGBT characters and allies from stage, screen and music, like RuPaul, Dorothy from the Wizard of Oz and Divine. These have been imported in from an independent gay business in Madrid and Gay Pride Shop is the only UK stockist.

All these new items join the 1000s they already stock, from flags and badges, to clothing and jewellery.

A percentage of their profits are shared with 3 LGBTQ charities and paid out every quarter. So far £1000s has been raised for the Albert Kennedy Trust, George House Trust and Mermaids.

Canal Street card members receive a 10% discount at all times. Either use the code CANALST when you checkout online at www.gayprideshop.co.uk or show your card in person in the Afflecks store.