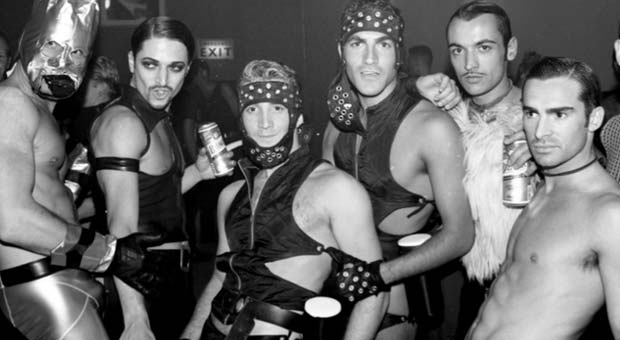 New book captures the Gay scene in the 90's

Throughout the 1990s Stuart Linden Rhodes was leading a double life. During the day he was a teacher in the classroom. But as day turned to night Stuart was to be found behind his trusty camera, capturing the goings on in LGBTQ bars, pubs, and clubs across the north of England in Blackpool, Birmingham, Derby, Liverpool, Leeds, Manchester, Newcastle, York just to name a few.

The scene Stuart shot was a diverse and vibrant populated by people of all shapes, sizes, colours, and creeds. It is a scene which was uniquely of its time and has since vanished, much like Stuart’s photographs which weren’t seen for nearly thirty years.

It was during the first lockdown, spring 2020, when Stuart was clearing his attic that he happened upon the negatives from the 1990s. He began scanning them and, on a whim, uploaded an image to Instagram. He got a like, then a follower and now, at the time of writing, Out & About with Linden has attracted over 4000 followers, pieces in the national press and now, a book.

As well as more than one hundred extraordinary images – many of them unpublished – this book features new interviews with some of the acts, clubbers, and patrons from the scene at that time.

These contributions will put these photos in a proper historical context for the first time. The 1990s were a time when the parties were bigger, the beats faster and queer people were coming out of the shadows.

The old, run down, damp, and dingy bars were a thing of the past. Now the gay scene was colourful, desirable and, crucially, visible. The floor to ceilings windows at Mantos, Canal Street, is testament to this new attitude.

But it was also a time when more people were dying of HIV and AIDS related illnesses than ever before, when fundraising buckets for hospices were common on the tops of bars and drag queens would stop their sets to deliver vital information surrounding safe sex.

This book brings this dichotomy to life in stunning detail through Stuart’s photos and the written contributions of those captured within in.

The book itself will be 196 x 156mm, hardcover in landscape format with 144 pages featuring even more of photographs. The print run will be 500 copies, a strictly limited number. We are raising £8000 to cover the printing cost and copies of the book can be pre ordered through our Kickstarter at READ MORE