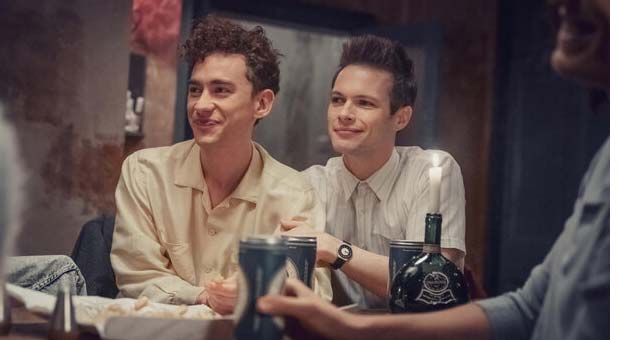 Q - So we'll move onto It's a Sin. It'll have been a while since you filmed that now?

Q - Whilst you were filming it did you realise how culturally significant it would be?

Nathaniel - I think we all knew we were onto something special. It was Russell T Davies for a start and also it was also RTD doing what he does best which is writing really great gay dramas. We've not had a gay drama that focused solely on gay mens lives since Cucumber so in that sense I was really excited when I got the call from my agent. I think we all knew it would make waves within our community and particularly then having read the script and having been to the table read through how powerful the script was and realising that this was really raw for the community.

HIV hasn't been portrayed in this way or had its own drama on British TV in 40 years which is pretty shocking. HIV has only appeared in small storylines in soaps and film or theatre tended to be European or American so getting it from the British perspective was really exciting.

As someone who has lived with HIV since 2003 I knew that this was going to have a profound impact but I didn't think any of us knew it was going to have such universal appeal and impact. I thought it was going to be a cult thing like Queer as Folk was. Just when it hit and seemed to be everywhere, 18,9 million streams and the most watched series on AllFour. We quickly realised in the first week that it was going to fly.

Nathaniel - Russell is one of the nicest gentlemen I've ever had the pleasure of meeting. I think I've been spoiled because him and his entire team were really just wonderful. I met Russell prior to getting the role, I made my show First Time in 2018 and we'd decided it needed an extra night so we took it to the Edinburgh Fringe and we were doing a preview in Manchester. I'd heard on the grapevine that Russell was making a show called Boys which would later become It's a Sin and I really wanted Russell to come and see my show. I did a really unprofessional thing and messaged him on Instagram and he messaged me back to say he already knew about my show through friends and wanted to meet up. Fast forward a week I was in a coffee shop giving one of my all time heroes giving him essentially a private show.

The character of Colin in the show contracted HIV after his first time so Russell wanted to get a sense of what he was writing from lived experience so from that he sent his producer to come and see my show. Working with Russell was just great.

Q - Most important question so far, what was it like kissing Olly Alexander!?

Nathaniel - Ha, it was great! Olly is an amazing artist and actor and I was thrilled to be working with such talented people. It was great to learn more about my craft from everyone and people say I'm the person they're most envious of having simulated sex with Olly Alexander but in reality the sex is very unsexy and it's all done in a very professional and safe manner with intimacy coordinators and lots of rehersals and tackling issues such as consent. It's a pretty new thing in the industry having intimacy coordinators on set so it helps you relax as an actor and you can be comfortable knowing all the safety parameters are in place.

Nathaniel - Part of me thinks they did that on purpose because they talk it down pretty much straight away after complaints so I feel like they were just doing clickbait which still doesn't make it right but the cynic in me goes 'they knew exactly what they were doing with that'. It's for that reason I just tend to ignore the Sun and the Daily Mail because they'll use any tactic they can to get shares and if that's outrage then they'll do it.

But yeah, I think normalising gay sex particularly on mainsteam TV is needed. I think the sex in It's a Sin was probably less in your face than it was in Queer as Folk and that was back in the late 90s. Primetime tele is full of shows about murder, rape, dismembered bodies and crime but we get up in arms about showing people having sex and not just gay sex but any sex. It's one of the most joyful parts of being human so why do we glorify all this death and crime but I feel happy when I see people making love on TV.

It's a Sin did it very well and one of the reasons why Russell didn't include HIV very promintely in Queer as Folk is because he didn't want the first big major gay drama on television to be defined by HIV and illness. I think that was the right move to make, we don't want to be continuously defined by the 'gay disease' or stuck in that mind set. Despite It's a Sin being about HIV and AIDS and ultimately tragic loss of life is show gay sex as really joyful and real and what it's like to be young and silly and have lots of sexual partners.

Q - It just demonstrates how much representation matters.

Nathaniel - Exactly. Russell is one of the best writers for doing that and what he writes is a reflection of the gay and queer experience.

Nathaniel - So yes, Queer Contact 2021 is all online this year which in a sense is great because it gives it national profile and you're not restricted to being in Manchester to see stuff. My outreach project, 'In Equal Parts' is an extension of my show 'First Time' which is a series of conversations one of which is me in conversation in Russell having chat about dramatising HIV and AIDs and the challenges he faced in getting It's a Sin on tele. We'll dig into why we've not had anything like this on tele yet considering it's been 40 years since the beginning of the epidemic and comparing it with my experience. What techniques I've used to dramatise my story and used it as sort of a therapeutic tool for myself for understanding my own diagnosis and helping others with that. That's the 30th April and it's a ticketed event online for one screen.

As part of that we'll be showing one of the films I'm making which is called 'HIV and Me'. It's 3 short creative films about other people living with HIV in Greater Manchester.

I want to say a massive thanks to Nathaniel for being so generous with his time. You can find lots more about Nathaniel on his website: https://www.nathanieljhall.co.uk/about

The First Time Play Text is also on sale through the website at £9.99 of which £3.00 is currently being donated to George House Trust to support the incredible work that they do.