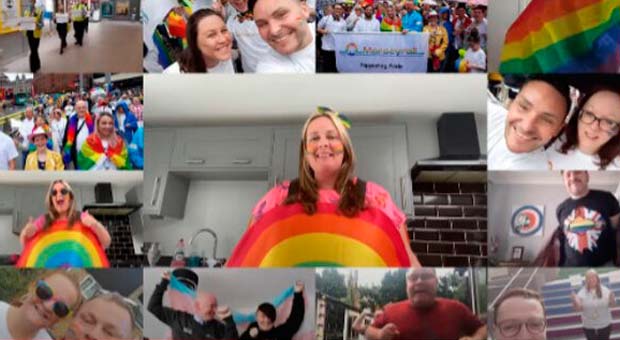 As we embark on our most community and activism-focused theme ever, From Now On, we launch a brand new series that shines a spotlight on those working to advance and support LGBT+ lives and rights in the Liverpool City Region and beyond, highlighting the many ways we can be activists and drive change.

We start the series with Tracey Upton, Employee Experience Manager at Merseyrail, who not only spearheaded the relationship between LCR Pride Foundation, and the company’s headline sponsorship of the inaugural LCR Pride Awards in 2019, but who was also recently handed the accolade for Best External Partner at the Annual Conference & Inaugural Awards of Network Rail’s LGBT+ network, Archway.

CONGRATULATIONS ON THE ARCHWAY AWARD, TRACEY! WHAT WORK HAVE YOU DONE THAT HAS CONTRIBUTED TO THIS SUCCESS?

“In addition to Merseyrail’s Employee Diversity Forum and the Women in Merseyrail network, we also launched our LGBTQ+ & Allies employee network in early 2020 and encouraged the network members and other employees to join Archway too, so they could support the community – not just within Merseyrail but across the rail industry and the wider railway family. I’ve worked closely with Archway since last year”

WHY IS SUPPORTING THE LGBT+ COMMUNITY SO IMPORTANT TO YOU?

“I believe that everyone deserves to have an equal opportunity at a career in any industry, regardless of their sexual orientation, gender, race or otherwise. Merseyrail works hard to ensure its workforce is inclusive and diverse, but we also identify that we still have a long way to go and are constantly looking at ways we can improve. The perception that our business or the rail industry in general is only welcoming to the masculine, middle aged, white male could not be further from the truth. Merseyrail wants the people of the Liverpool City Region to know that they are a modern, inclusive employer that is supportive and welcome to all, both staff and customers alike”

HOW DID YOU GET INVOLVED WITH ARCHWAY?

“It started when I helped Harry Levey, from Network Rail’s Archway, and a group of other rail industry colleagues to plan, organise and host the first ever ‘Rail Industry Presents Pride Festival’ in 2020. Everything else flourished from there.

“I hosted and sat on the panel for a ‘Coming Out for Pride’ discussion event, alongside one of my Merseyrail colleagues, co-hosted an LGBTQ+ 101 & Allies session, an LGBTQ+ quiz and the finale of the ‘Rail Industry Presents Pride Festival’.”

WHAT KIND OF RECEPTION DID THE FESTIVAL HAVE?

“The programme was jam-packed and the sessions were attended by more than 500 rail industry colleagues. That really motivated me to start planning future events as it showed there was an appetite for what we were doing.

“We worked really hard to plan and co-host our own LGBTQ+ 101 & Allyship session and were so pleased when we found out that it received good feedback, with 100% of people saying that they were very satisfied. Harry also informed me that almost all the positive feedback comments referenced me and my colleague personally as being what made it so amazing, which was very flattering and humbling”.

SO WHAT’S COMING NEXT?

“We are continuing our work on inclusion here at Merseyrail and we recently co-hosted a fantastic session for Transgender Day of Visibility. I loved playing an instrumental role in the festival last year, so I am now working with Harry, Shane Andrews MBE – the Chair of Archway – and colleagues from Abellio Group and across the industry, to plan and organise the ‘Rail Industry Presents Pride Festival’ for 2021.

WHAT, IN YOUR OPINION, IS ACTIVISM, OR BEING AN ACTIVIST?

“Being an upstander not a bystander, an active ally and being aware of changes that need to be made to improve the lives of others and working out how and where you are able to do that. For me, it has been through my workplace and the rail industry. It’s also about being passionate about the causes you support. For me I am passionate about real inclusion and intersectionality. That’s why, in addition to the LGBTQ+ 101 and Allyship webinars that I have hosted for the Rail Industry Presents Pride Festival, National Inclusion Week and LGBTQ+ History Month, I have also co-hosted ‘Let’s Talk Race’ webinars for Race Equality Week and Black History Month. I have also started working with Network Rail’s Cultural Fusion network.”

WHAT ADVICE DO YOU HAVE FOR PEOPLE WANTING TO GET MORE INVOLVED IN ACTIVISM?

“Make sure you’re always listening and learning. Find groups that support the causes that matter to you. There will always be ways you can do your part when you work with groups that exist to make change. We all have the power to be positive change agents.”

IN LINE WITH OUR NEW THEME, WHAT IS IT THAT YOU PLEDGE TO CHANGE “FROM NOW ON”?

“From now on I pledge to work hard to change how people may perceive the rail industry. I will continue to collaborate with colleagues to ensure we are an inclusive employer where our people feel supported and empowered to bring their best self to work but also to ensure we are representative of the communities we serve”.