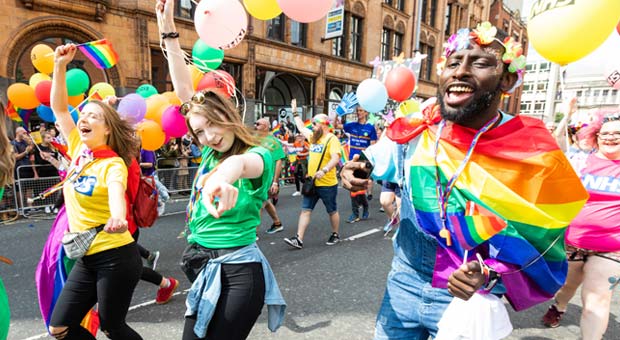 Manchester Pride today announced that the theme for the 2019 Manchester Pride Parade will be Deep Space Pride: A Future World of Equality, as the LGBT+ charity invites the city to look forward and envisage what the world could look like in the distant future.

The Manchester Pride Parade, which forms an integral part of the bank holiday weekend Manchester Pride Festival, will take place on Saturday 23rd August, as the charity invites LGBT+ people and allies to come together and march through the city centre.

This year the theme for The Parade will be Deep Space Pride: A Future World of Equality, and those marching are asked to think about what LGBT+ communities and the attitudes towards them could look like in the future. Colours are expected to be as diverse as the communities that march, as the charity looks to a world where all people are free to love without prejudice.

The theme of the Parade acknowledges the fiftieth anniversary of The Stonewall Riots, an event that is widely considered to constitute the most important event leading to the gay liberation movement and the modern fight for LGBT+ rights in the United States. While LGBT+ charity Manchester Pride encourages people look to the future, they also look to how far Manchester has come already.

The Parade, which was bigger than ever before in 2018, with just over 10,000 participants in floats and walking entries from businesses and community groups across the region. It is one of the festival's most highly anticipated events, with thousands of people marching proudly together through the streets of Manchester in front of and tens of thousands of supporters cheering them along the way.

With organisations taking part last year including Greater Manchester Police, the fire service, local businesses, charities and the stars of Coronation Street, there will certainly be lots to see.

The Manchester Pride Parade starts on Liverpool Road, passing by the Town Hall and the Gay Village before finishing on Whitworth Street. In recent years it has been led by some of the most prominent faces in the LGBT+ world including Orange Is The New Black actress Lea DeLaria, national treasure Sir Ian McKellen and Manchester’s first out Lord Mayor, Carl Austin-Behan.

Applications are now open for those who wish to take part.  Businesses that have taken part in previous events have included Autotrader, Barclays, Marks and Spencer, John Lewis and Thomas Cook Airlines.  For more information visit manchesterpride.com/parade.

Mark Fletcher, chief executive for Manchester Pride, said: “As we acknowledge the 50th anniversary of the Stonewall riots, an event which kick started the modern LGBT+ pride movement, we are taking a clear moment to stop, reflect on the changes in society, acknowledge the progress that has been charted and consider the future of LGBT+ equality. What will this look like?

“At Manchester Pride, our vision is a world in which LGBT+ people are free to live and love without prejudice. We're inviting people to fast forward 50, 100 or even 200 years and envisage what the world could be like at this time, as we march for LGBT+ equality.”

Earlier this year Manchester Pride announced the brand new format for the 2019 Manchester Pride Festival and a new home for the August Bank Holiday event’s live music experience, but the Manchester Pride Parade will remain the same as it welcomes hundreds of thousands of revellers to witness the spectacle of LGBT+ people marching across the city centre on Saturday afternoon.

Manchester Pride Festival, which takes place over four days in Manchester city centre every August  Bank Holiday (23 - 26 August), will now be made up of six key elements, extending the reach of the LGBT+ event even further and creating new touch points for all LGBT+ people across Greater Manchester and beyond.

Manchester Pride Live at Mayfield will take place over two days - Saturday 24 and Sunday 25 August - and will host artists across two stages in and around the Mayfield Depot, part of the former Mayfield Station site close to Piccadilly station.  World class acts including Ariana Grande and Years and Years will perform each day in a ticketed party, the like of which has never been seen before at the festival.

Manchester’s Gay Village always has and always will be the heart of the Manchester Pride Festival and 2019 will see the creation of the ultimate street party - the Gay Village Party. With community performances in Sackville Gardens, plus markets and parties across the village’s venues, it will continue to be home to the hub of the festival’s LGBT+ celebration.

It will remain a ticketed part of the festival and will be a focal point for the huge celebratory weekend.

The Candlelit Vigil will continue to close the four days with a moment of reflection in Sackville Gardens. The home of Alan Turing and the Beacon of Hope will again be turned into a sea of flickering candles as the party calms and people take a minute to remember those lost to the HIV virus as LGBT+ people join together to fight the epidemic worldwide, and the stigma that still exists. The Candlelit Vigil also provides a space to remember those who are suffering and those who are persecuted and presents an opportunity to stand together in a united front as we recognise the many challenges that are still faced by LGBT+ communities, both here in the UK and around the world.

The Superbia Weekend is the festival’s alcohol-free space offering a weekend of premieres, firsts, new work and LGBT+ celebrations as a culturally rich alternative to the hedonism of the other elements of the festival. Its free-to-attend programme includes film screenings, cabaret, conversation, community workshops, new art and a free post-Pride Parade party. The events, which were last year hosted at 70 Oxford Road and HOME, will also have a home in the Gay Village in 2019.

Youth Pride MCR will be a free-to-attend event for 16 to 25-year-olds. It will be developed through engagement with young people from across Greater Manchester.