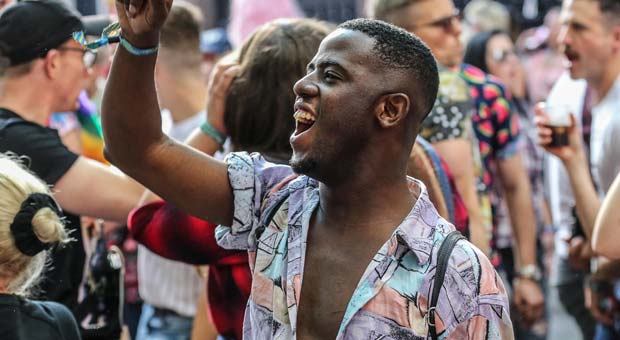 With a brand format and new event spaces, the 2019 Manchester Pride Festival was an LGBT+ celebration unlike any other in the UK as the city welcomed hundreds of thousands of people to six key events across Manchester.

Mark Fletcher, chief executive for Manchester Pride, said: “I'm very proud of what we delivered, the feedback we've received has been incredible. Our audience simply had not anticipated the scale of the new foramt for the festival, nor how we'd retain the heart of it at our Gay Village Party. We’ve been able to cater the experience for our audience so that everyone had the opportunity to choose their own celebration. From the world class music performances at Manchester Pride Live , a culturally enlightening experience at Superbia Weekend and our brand new event for young LGBT+ people.

“It’s been an exciting year and with the learning from this year, we can’t wait to reveal some of the plans we have in store for 2020. Whatever the shape of our festival in years to come, we're committed to providing a first class experience of celebrating LGBT+ life with music, continuing our campaign for true equality.”

At the heart of this year’s Manchester Pride Festival was the all new Gay Village Party. Taking place throughout the weekend, from Friday 23rd - Monday 26th, attendees were treated to a host of exciting activities and events, including the Sackville Gardens stage which saw performances on Friday night from the likes of Liberty X and Saara Alto with Lulu headlining on Saturday.

The much missed fairground rides returned with the introduction of the Sackville Square Markets which also included food stalls and markets. Also for the first time in the festival history, the Festish Emporium was launched,  a night market with stalls and demonstrations and performances.

In a first for Manchester Pride Festival, the organisers introduced a new Family Zone on Saturday 24 August in the Gay Village Party. The event welcomed families and children under 14 and coincided with the Manchester Pride Parade Screening taking place in Sackville park.  Music came from the Junk Orchestra which featured a supersonic recycled collection of objects, rescued and re-invented from the urban sprawl! The picnic area welcomed the incredibly popular Drag Queen Story Time and Proud To Be Parents: One stop shop, who offered advice for any LGBT+ person/people that would like to start a family, offering information and advice on each of the various avenues.

For the final day of the celebrations, the Gay Village Party was still going strong with Trans Pride taking over the Sackville Gardens stage. From 1:30pm until 5pm, party-goers could see performances and discussions from drag king Dorian Wilde, Wesley Dykes, Mermaids and Trans Creative director Kate O’ Donnell.

Darren Pritchard, creative director of Afro Eden and Mother of the House of Ghetto said “This year Manchester Pride trusted me and supported the first ever Black Pride MCR activities - from the sold out vogue ball to to upcoming film screening for Deep in Vogue. It was great to be able to showcase the often invisible QTIPOC community in performances at the Deep In Vogue cinema event and a two hour take over at Sackville Gardens with the crowd chanting for more! ”

This year saw the fourth Superbia Weekend. It provides a free to attend, dry celebration of LGBT+ life and culture. The three day programme of events kicked off with a film screening of “Beyond...There’s Always A Black Issue, Dear” which received critical acclaim from the likes of GQ ahead of the festival.

As well as yoga workshops, art exhibitions and thought-provoking performances throughout the weekend at 70 Oxford Road, the headline event for The Superbia Weekend came in the form of the Manchester premiere of “Deep In Vogue’. The BFI nominated film saw two sellout screenings on Saturday plus a performance party at The Refuge, including conversations with filmmakers followed by performances from House of Ghetto and local DJs.

Mark Fletcher continued; “We’re so proud to be able to offer an alternative celebration for those who would prefer to take a back seat from the party element of festival and simply soak in a weekend of LGBT+ culture. A personal highlight for me has to be the homecoming premiere of “Deep in Vogue’ - Darren and his dance troupe are incredible performers and it’s an honour to watch them captivate a crowd.”

This year the theme for the Parade was Deep Space Pride: A Future World of Equality, the famous Coronation Street float was a highlight this year along with headline sponsors Boohoo and their futuristic float. Parade award winners included The Prairie Dogs for the best walking entry, national transgender charity Sparkle for spririt of the parade and HOME for best overall entry.

Michael Jones from The Prairie Dogs said “We were absolutely delighted to win the prize for best walking entry in this year’s Manchester Pride Parade with our Captain Spock & The Star Trek Troopers themed line-dance routines! We’ve enjoyed taking part in the parade for many years now and, as well as the fun factor, believe that being part of a parade celebrating LGBT+ diversity is still hugely important. Of course, we’ve come a long way since Stonewall and we are forever thankful for the work that those brave people started back then for our community - standing up for our rights and being counted. But there is still inequality and discrimination, both in this country and across the world, and being visible in a Pride parade or event that attracts a wide and varied audience is one of the best ways to put our LGBT+ feet forward and demonstrate inclusively that we’re actually just one big human family and that we should celebrate our diversity, and enjoy and respect each other’s company. Prairie Dogs will turn 25 next year and we are already excited about taking part in the Manchester Pride Parade 2020!”

The theme of the Parade acknowledged the fiftieth anniversary of The Stonewall Riots, an event that is widely considered to constitute the most important event leading to the gay liberation movement and the modern fight for LGBT+ rights in the United States.

This year there was a surprise in store for attendees as the queens from RuPaul’s Drag Race UK made their first ever appearance on their own float during the parade featuring 50ft tall legs imitating Mother Ru herself which death dropped their way through the streets of Manchester!

The remodelled site featured a number of performance spaces including the huge outdoor performance space The Yard. Highlights included performances from Kim Petras, Emeli Sande and Years and Years on the Saturday, while Sunday saw Pixie Lott, Becky Hill and Tulisa grace the stage. Headliners included pop princess Cheryl who stole the show with her set of new hits and Girls Aloud classics. Ariana Grande also made a triumphant return to the city of Manchester performing all the fan favourites.

The indoor Depot was also a popular addition to the weekend as it played host to DJs and dance acts including Basement Jaxx, Faithless and Ministry of Sound Classical.

Mark Fletcher, CEO of Manchester Pride said “Our brand new live music event "Manchester Pride Live" was another highlight. The event took place in and around Mayfield Depot, a brand new event space. This space had a capacity of around 20,000 (MF to confirm) with our biggest stage and production installation to date. The atmosphere on Sunday night between performances from pop icons Cheryl and Ariana Grande is a memory that will stay with me for a very long time, it was incredible, the unique setting added to the extraordinary celebration of LGBT+ life.”

The inaugural Youth Pride MCR was a free-to-attend event for young LGBT+ people aged 14+ which took place at YES over the Saturday and Sunday of the August bank holiday weekend. It was developed through engagement with young people from across Greater Manchester.

Saturday saw a day of  “Free Yourself” -  an afternoon of fun with a vogue workshop provided by Darren Pritchard, a Lip Sync Battle hosted by drag queen The Nightbus. Attendees were then treated to a surprise performance from Olly Alexander from Years and Years, performing stripped down versions of a number of well-known hits including “King”.

Darren Pritchard, Mother of the House of Ghetto said  “Teaching a vogue workshop at Youth Pride MCR was extremely special as these are the ones that are going to shape queer future.”

After the excitement of the previous events, Sunday’s theme was Know Yourself - a more subdued day of the two consisted of an author talk from Matt Cain, LGBT+ discussions with Kate O’Donnell as well as make-up workshops, cross-stitching lessons and sing-along cinemas.

Mark Fletcher CEO of Manchester Pride said “A personal highlight for me this year was the introduction of Youth Pride MCR, our free to attend event for young LGBT+ people aged between 14 and 25.  We planned a surprise performance for the audience from Years and Years who were also appearing as the headline act later that night at Manchester Pride Live. The young people were shell-shocked and Olly had them all in tears as he sang at his keyboard!”

The culmination of The Manchester Pride Festival is The Vigil in which Sackville Gardens turned into a sea of flickering candles as visitors were able to take a minute to remember those lost to the HIV virus and join together to fight the epidemic worldwide and the stigma that still exists.

The Candlelit Vigil also provided visitors with a space to remember those who may no longer be with us and presents an opportunity to stand together in a united front as we recognise the many challenges that still exist and face LGBT+ communities from Manchester to the rest of the world.

The Vigil is the spiritual heart of The Manchester Pride Festival and there is a truly magical and moving atmosphere of quiet reflection in the gardens. This year the Vigil was led by director of Trans Creative, Kate O’Donnell as well as the stars of Channel 4’s Drag SOS Cheddar Gorgeous and Tete Bang. Performances at the event were given by The Sunday Boys, Manchester Lesbian and Gay Chorus and Tolu Ajayi, who broke the one minute silence with a cover of Pure Imagination.

With plans already in place for 2020, Manchester Pride Festival is shaping the future of LGBT+ equality and is looking ahead on how to make each year even bigger and better than the last.