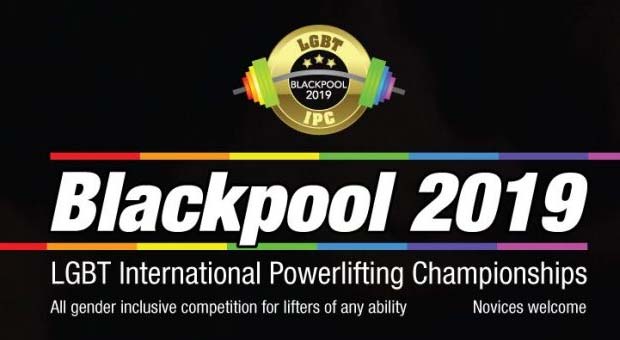 The LGBT International Powerlifting Championships 2019 are delighted to announce they have been granted a Civic Visit from the town of Blackpool, with The Worshipful Mayor, Councillor Amy Coss in attendance to perform ceremonial duties. The Lady Mayor will be presiding over the medal and award ceremonies and will be taking time to meet some of the LGBT IPC 2019 officials and athletes at the event on Saturday 20th July.

Blackpool will be hosting the strongest LGBT athletes from all over the world on the weekend of 19th, 20th & 21st July, as the third edition of LGBT IPC arrives at the Blackpool Sixth Form College and will be staged in their 300 seat high tech theatre auditorium. Athletes will be making the trip from Australia, Belgium, France, Germany, Ireland, Romania, The United States of America and of course from all over Great Britain to perform in the disciplines of Squat, Bench Press and Deadlift.

The Championships are set to grow in size to a group approaching two hundred people, which is over four times the size of the previous events in 2017 and 2018 in London (including athletes, officials, crew, media and spectators). The Championships are accessible to those of all genders and abilities and in 2018 LGBT IPC was the first sports event in the world to introduce an optional MX Category for Trans, Intersex and Non Binary participants in any sport.

This year’s Championships will be attended by Novices, National Champions, World Champions, World Record Holders. The LGBT IPC competition is particularly friendly towards novices as they have their own category, for those who are competing for the first time. LGBT IPC is very committed towards reaching out to sections of the community that are under-represented in the sport of Powerlifting.

We look forward greeting athletes, officials, coaches, crew, media and spectators in our spectacular new venue. Auditorium / Spectator tickets are still available priced at only £5 each, with all proceeds going towards the development of LGBT Powerlifting. Championship day is Saturday 20th July at Blackpool Sixth Form College, Theatre Auditorium, Blackpool, Lancashire,  FY3 7LR – Doors open at 9am. The venue will have  a Healthy Living Café will be open all day for spectators and guests to enjoy.

Tickets are available  via link below

More Information Can Be Found here at our website