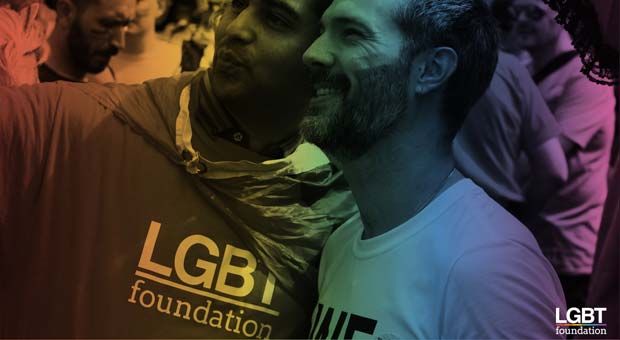 This August Bank Holiday, LGBT Foundation have been celebrating the 25th anniversary of their ground-breaking condom and lube distribution scheme. The scheme is the longest running scheme of its kind in the world and the current largest outside of London, and led a pioneering approach to sexual health at the height of the AIDS crisis.

Since the scheme’s inception it has distributed over 30 million condoms and sachets of lube and has helped tens of thousands of people have happier and healthier sex since it launched.

In 1994, Paul Martin OBE (current Chief Executive of LGBT Foundation) formed Healthy Gay Manchester in part to ensure that men who have sex with men were at the centre of the response to HIV.  HGM had a clear aim to reduce the incidence of HIV infection by offering free condoms and lube, providing sexual health information and counselling services to men who have sex with men.

Volunteers packed condom and lube packs every week and by 1999 they were packing 9,000 every Wednesday night to be distributed across 55 locations including saunas, shops and Manchester Gay Village venues. Condom packs were redesigned as wallets and boxes produced to both store and display them.  By 2002 over half a million condoms had been distributed and volunteers could no longer keep up with demand so packing was outsourced.

Today, the scheme distributes over 90,000 safer sex packs across Greater Manchester every year.  Each pack contains 2 condoms and 2 sachets of lube along with information about testing services and accessing PEP in case you have concerns of HIV exposure. To mark the 25th anniversary, 25,000 safer sex packs will be distributed over the Manchester Pride Festival weekend.

For twenty five years our condom and lube scheme has provided free and accessible safer sex packs, first to gay and bisexual men, and now to all LGBT people living, working and visiting Greater Manchester.

Throughout that time, the scheme has been run for the community, by the community. Over the past two and a half decades we’ve delivered condoms and lube in all weathers.  Manchester rain, snow and sunshine has never got in the way of missing a single delivery. Our volunteers spent countless hours preparing packs by hand each week to make sure that our communities sexual health was protected and improved.

We’ve always adapted to the needs of our community- we even went to men’s clothes shops and measured every trouser pocket we could find to be sure that our packs would always be able to fit in people’s back pockets.

We are incredibly proud to be celebrating this momentous anniversary and we are grateful to Manchester Pride for their ongoing and continued support. We look forward to many more years of working together to support our communities and continue in the campaign to end new cases of HIV in a generation.”

“We are very proud to be the sole funder of this amazing and vital scheme which started here in Manchester and is like no other in the world in its tireless work to help protect LGBT+ people and promote safe sex.”

The Condom and Lube Distribution Scheme has been running in association with Manchester Pride, and its predecessor festivals, since it’s very first year in 1994 when 24,000 condoms and 24,000 sachets of lube were distributed over the August bank holiday weekend.  To celebrate the anniversary of the scheme and its impact over the years, LGBT Foundation will be holding a pre-parade brunch on the morning of Saturday 24th August which will include a recreation of one of the original ‘packing parties’, including with some of the scheme’s first volunteers.