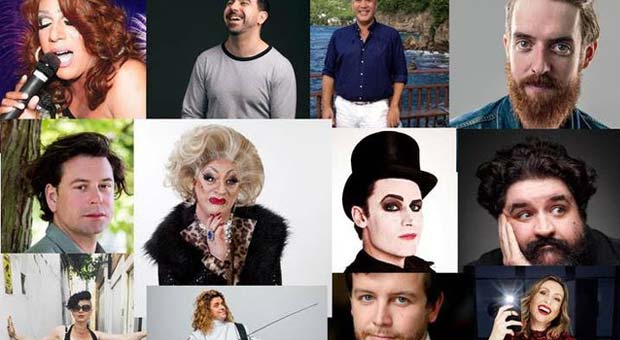 LGBT artists and some supportive allies launch via Only Fans

Both lower the levels of stress-causing hormones cortisone and adrenaline. Both cause a surge of endorphins, which relax and de-stress. In fact, along with chocolate, laughter and sex are two of the most immediate ways a person can chemically alter their mood in a positive way.

Now OnlyFans.com, best known for its adult content (although 35% of content has always been non-adult, including things such as sport, fitness, music lessons and nutrition, yet the tabloids have very much focussed more on the former) is getting in on the um… action, adding a number of comedians to its roster of content creators.

OnlyFans.com was set up to be a space where people could create whatever content their fans wanted to see, and with an over-18s only policy, the restrictions on what comics can and cannot say are far less limited than on Facebook, YouTube or Instagram.

This means that performers are potentially able to create something more akin to their usual comedy club material, with the freedom to rant and swear and crack eyebrow raising jokes should they wish to. And with 23 million subscribers, with numbers during lockdown growing by up to 100,000 a day, comics are hoping to not only direct current fans to a new way to watch their content, but also to find a brand-new audience along the way.

Today a slew of new comedy accounts has been launched – meaning people can click the links to the pages today, and content will begin to be regularly uploaded over the coming weeks and months. New comedy recruits are:

DUSTY LIMITS: Dusty Limits is a singer, comic and cabaret artist and one of the leading figures on the new cabaret scene. Described by Time Out London as 'The Trailblazer' of cabaret, he has performed everywhere from backroom bars in Berlin to major venues in New York, as well as all over the UK, Europe, Australia and New Zealand. Dusty says: “I'm thrilled to be part of OnlyFans. It feels distinctly naughty, which is right up my alley” https://onlyfans.com/dustylimits

MYRA DUBOIS: Myra DuBois is a multi-award-winning performer, as seen on television, internationally revered and globally adored star of stage and screens both large and small. She’s now found a humble new home for exclusive online content made available especially for you, her AdMyras!  Myra says: "I can’t tell you how thrilled I am to be putting out exclusive content for the most ardent of my AdMyras on this wholesome website! Who'd have thought at this point in my career I'd be putting out an 'OnlyFans'? Certainly not me..." https://onlyfans.com/myradubois

SAM PAMPHILON: Sam is best known as a Team Captain on Go 8 Bit (DLT Entertainment/Dave), developed from an Edinburgh show that he created as part of comedy double act McNeil & Pamphilon. Hosted by Dara O Briain, Go 8 Bit ran for three series from 2016-2018 and spawned the spin off series DLC. Sam says: “I’m looking forward to seeing if there really is any fiscal value in my cess pit of a life” https://onlyfans.com/sampamphilon

YIANNI AGISILAOU: Yianni is an award-winning stand-up comedian, and writer who has worked extensively in the UK, Europe and Australia. His shows have been nominated for and won awards at the Edinburgh Festival Fringe and various Australian festivals.  His comedy finds entertaining and accessible ways of explaining complex issues to a lay audience. Yianni says: “I look forward to bringing my knowledge and passion to the platform and to engaging, entertaining and educating my fans” https://onlyfans.com/yianni_a

GRANT BUSÉ: Grant Busé is an Australian comedian, singer and multi-instrumentalist. His unique brand of interactive rockstar comedy is enjoyed by audiences far and wide. Grant has toured his original shows internationally to critical acclaim and sold out houses. In 2018, he was placed in the top 10 must see comedy shows at the Edinburgh Fringe Festival by The Scotsman. Grant says: "For all the comedy facebook bans, subscribe to us on OnlyFans" https://onlyfans.com/grant_buse

JOJO BELLINI: Saucy songstress & culinary queen JoJo Bellini gets juices flowing with sassy dance moves and mouth-watering dishes. Sometimes all in the one go. JoJo has been a darling of the fringe circuit in Edinburgh, Brighton, Prague and Australia and now she brings her salaciousness straight into your home. A lover of all things 80’s JoJo sashays her way into hearts and loins. JoJo says: : “I’m so excited to be working on this platform. Entertainment is the reflection of who we are as a society. And I choose to make it saucy!” https://onlyfans.com/jojobellini

SANDRA LONDON: Upon entering the world of drag cabaret, Sandra realised it was the perfect way to get the attention she’d always craved and make some cash that didn’t involve lying on a mac in the back of a Fiat Punto. After 30 years of singing, cracking jokes and shaking her money maker all over the place, Sandra is still one of the best performers on the scene. Now she’s bringing her many talents to OnlyFans. Sandra says: “I’ve been working the scene for nearly three decades and I’m known for filthy fun that’s certainly not family friendly, so I was thrilled to be asked to join OnlyFans as that’s the place for me. I’m home at last! I can’t wait to see what people think of my shows and I hope the OnlyFans audiences will get what I do. I’ve always loved performing live on stage so I can interact with my audiences, but the Go Live option on OnlyFans means I can do the same, but it gets me beamed directly into people’s homes. So lock up your silverware… and your husbands too” https://onlyfans.com/sandralondon

JONATHAN PHANG: Jonathan is perhaps best known as a judge for three seasons on the hit show Britain’s Next Top Model. He was then a recurring guest on “Market Kitchen” for the shows three years run. Mixing humour and cooking expertly, Jonathan then hosted a ten-part gastronomic journey through the Caribbean for Food Network UK called “Jonathan Phang’s Caribbean Cookbook”, exploring the melting pot of cultures that form Caribbean cuisine. Now he brings his unique blend of food and laughter to OnlyFans.

Jonathan says: “Cooking is my life and I’m delighted to become a part of the OnlyFans family, because it means it gives me a way to connect directly with the people who already enjoy what I do as well as helping others discover ways to enjoy different types of food so they can create exciting meals themselves. I always enjoy bringing humour and laughter to my kitchen and cooking, so my subscribers will be able to enjoy a laugh, a glass or two of good wine and a plateful of delicious food all at the same time.” https://onlyfans.com/jonathanphang

ROSCO MCCLELLAND: Twice nominated Best Newcomer at the Scottish Comedy Awards, and winner of Scottish Comedian of the Year in 2016, Rosco’s endearing onstage presence has impressed judges and audiences alike. Rosco is known for his naturally humorous delivery and surreal observations. He is frequently compared to fellow Glaswegian Billy Connolly. Rosco says: “OnlyFans is such a huge platform, I can’t wait to get involved and create fresh, engaging content for my community” https://onlyfans.com/roscomcclelland

RICHARD SANDLING: Richard Sandling is an award-winning stand-up comedian, actor, writer and content creator. His TV work includes regular appearances in Zapped, The Catherine Tate Nan Specials and appearances in Peep Show, Miranda and on Russell Howard’s Good News. A huge film enthusiast, Richard runs Squat Betty Avant Garde Film Night, a short film night showcasing experimental cinema, and Richard Sandling’s Perfect Movie, a film-based live comedy show which he has performed at festivals all over the world. Richard says As someone with many strings to their bow, it's a wonderful opportunity to connect more directly with your audience and focus on providing that content that they want most of, as well as surprising them every once in a while with something unexpected. https://onlyfans.com/richardsandling

ELEANOR CONWAY: Eleanor is a comedian and presenter who has been performing nationwide since 2014. Her self-produced debut show tour ‘Walk of Shame’, which detailed her battle with addiction, sold out dates in over 10 countries on a multi-award winning 100 date tour. An advocate for drug and alcohol rehabilitation in 2018 she hosted Kaleidoscope’s 50th celebration at the House of Lords as well as writing about her experiences dating in sobriety for The Guardian and guesting on BBC’s Woman’s Hour. Her new show is called You May Recognise Me From Tinder. OnlyFans is the perfect place for her style of comedy. Eleanor says “My shows are usually a bit too hot to handle for most audiences but I think the OnlyFans community will be more tuned up to the filthier side of comedy and get what I do. I can’t wait to debut my 'too hot for other channels' (fully clothed) content on Only Fans. If you want award winning comedy content from this ex porn editor, the worst Sugarbaby in the world and London's best Tinder addict... then you know where to come” https://onlyfans.com/eleanorconway1

Any comics or other performers who would like to sign up to OnlyFans.com and take advantage of  free assistance and guidance from the UK support team The Humble Group, should contact them on admin@humblegroup.co.uk