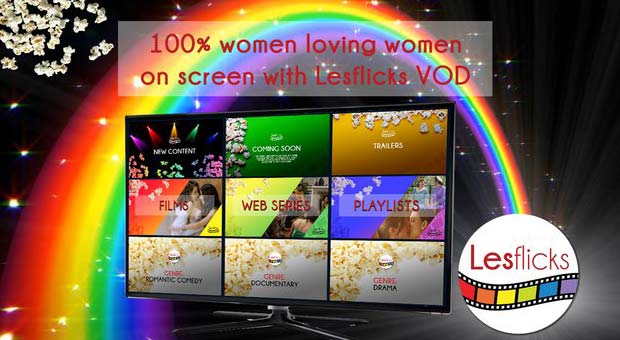 Lesflicks goes from strength to strength

Just 6 months after fully promoting the platform, Lesflicks now sits firmly in the top 5 LGBT SVOD platforms in terms of the amount of lesbian & bisexual content available to subscribers.

Lesflicks’ collaborative and innovative approach is attracting international filmmakers and distributors who see the benefits of screening their content in a centralised environment. There is certainly no lack of high calibre content available; and our mission is to get it to the target audience in ways that it is legal to watch in their own countries. Our Video On Demand (VOD) platform includes 100% films, shorts, documentaries and music videos, telling lesbian & bisexual stories about lesbian & bisexual characters. Just 6 months after we started promoting Lesflicks, we already have more lesbian & bisexual films than the majority of LGBT VOD platforms around the world. The reality is that most platforms have less than 10% women loving women stories in their catalogues – this was one of the key drivers for launching Lesflicks. We are excited for what the future holds!

“In my wildest dreams I would never have thought that a mere 18 months ago a seed would be planted for launching Lesflicks – a concept initially with a view to formally launching and promoting the Video on Demand platform by the end of 2020 once we’d proven the audience and secured investment. Setting the end of 2020 as our big push launch date was seriously underselling ourselves, and a date that was scrapped when lockdowns sprung up around the world. It is quite incredible that with the incredible and unexpected growth we have experienced that our platform’s launch has been fast-tracked, with a large and growing database of films and an expanding audience.”

While Covid-19 has presented challenges for so many people around the world, we have faced these challenges head-on to make sure our target audience has had the opportunity to access our films. Not only have we run over 35 watch parties on Zoom and Streamyard since March 2020, we also premiered our first ever online Lesbian short film festival, supported by LFest which saw over 500 women engaging with 26 films across 3 days and attending 14 online events. We supported the release of lesbian film Summerland by re-activating our London Film Club in a Covid-safe way; and we also have added over 40 films to our platform to meet the growing demand for the content we offer.

In the coming months we are releasing a number of feature films on our video on demand platform.  The Kristen Stewart and Chloe Sevigny classic Lizzie, has just been added as a UK rental, and we will be premiering two brand new lesbian feature films, AESOP (8 October) and Forever Not Maybe before the end of the year and we’re also excited to be releasing Rain Beau’s End in February 2021. We’re in discussions on other older films which we will add into our release timetable as they get confirmed.

As one of our clients commented as to why they love and choose to release their film on Lesflicks, “I feel with the huge amount of indie film that is now on the market, another indie film released to the market is just like another tree being planted in one great big forest. However, if you plant your tree in an orchard where buyers are shopping for your type of fruit and you make sure your marketing efforts put those buyers right in front of your fruit tree. I believe you have a good chance of getting 'picked'. ????????”

Right now at Lesflicks we are collaborating and creating support packages to work with distributors, filmmakers, film festivals and PR companies to ensure we have the rights to existing films, while also growing our film database with new releases and helping to ensure new releases are known and available to the intended audience, even if they’re not on Lesflicks. We see the importance that lies in women-loving-women stories reaching their audiences. The challenge for films with niche content and target audiences, is alerting, finding and reaching the people who are hungry for the films being created by dedicated filmmakers. At Lesflicks our mission is to make it happen.

Lesflicks is a volunteer run organisation, still in its infancy, and we have so much pride in the team of amazing women, who have joined the founder on this journey, embraced her vision and helped in achieving everything we have until now. Onwards and upwards for Lesflicks!