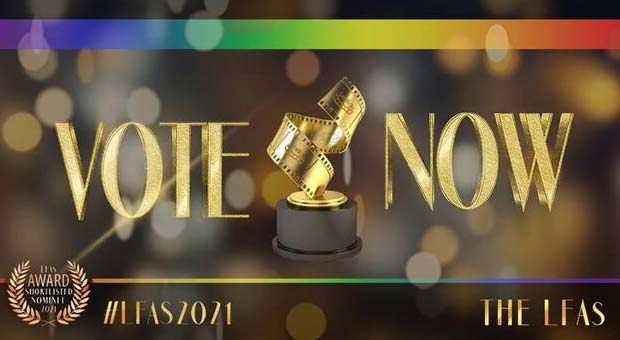 The Lesflicks Film Awards (LFAs2021) aims to identify, highlight and promote the films, creators and distributors who are going above and beyond in helping to #AmplifyLBTQFilm

From 13 December 2020 to 15 January 2021 any film fan - from audience members to filmmakers, distributors and cinemas/theaters - all around the world were given the opportunity to submit their nominations for their favourites in a vast array of award categories.

The categories include best short/feature films, best queer icon, film clubs, film festivals, media outlets, etc. Lesflicks wanted to give everyone a chance to be celebrated for their work and involvement in making and amplifying LBTQ-inclusive films/series.

With almost 400 entries received across the nomination period, the nominees were then narrowed down in each category so that those with the most nominations would be shortlisted for the final stage of the awards process – the all important vote!

From 21 to 31 January 2021, voting will be open to any film fans around the world to cast their final deciding votes on the shortlist! Everyone will have an equal voice with one vote per person, per award category.

Naomi Bennett, Founder said: “Since the launch of Lesflicks in 2019 I’ve seen just how important all aspects of filmmaking from production through to distribution is currently extremely challenging for lesbian & bisexual film. I created these awards to highlight all the hard work going on behind the scenes, and to amplify those committed to these films. The categories were created giving thought to how to amplify smaller films that often get overlooked and to hopefully encourage more people in the future to seek out and support lesbian & bisexual film – whether that be in investment, the cinemas/theaters or through the press and media talking about these films. The awards nomination has thrown up some really interesting insights and also given us some great areas to focus on in 2021 to help further improve the knowledge of, and access to lesbian & bisexual films going forward.”

VOTE NOW VIA THE LINK BELOW.