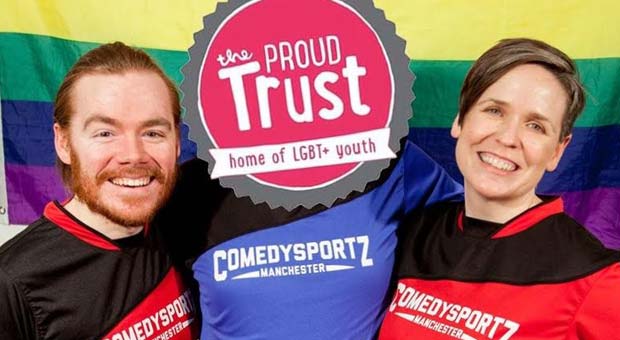 Manchester based ComedySportz UK are doing a special online show on Saturday 13th June in support of local LGBTQ+ charities. This comedy show will stream online and feature comedians from around the world, all of whom identify as LGBTQ+.

ComedySportz shows or “matches” see two teams go head to head with improvised gags and games inspired by audience suggestions. Shows are appropriate for all ages as the referee is on hand to give penalties for bad behaviour… and bad jokes! The Manchester team are just one of thirty ComedySportz teams around the world.

“Inclusivity is at the heart of what we do and we believe coming together to play and have fun is the best way to build bridges,” says Braínne Edge who started the group in 2001. “We’re delighted to be bringing LGBTQ+ ComedySportz players together from Manchester UK to the west coast of America for this very special online show.”

“CSz has always been about bringing the fun and making accessible shows for EVERYONE. That's why I'm proud that we do PRIDE,” says improviser and Stand-Up Kate McCabe. “Also, as captain of the blue team, and a fierce battle lesbian, I'm looking forward to absolutely smashing the red squad to smithereens.”

ComedySportz has been performing shows online since lockdown went into effect and have been relying on audience donations to support players. For this show however the team are asking audiences to donate to support The Proud Trust and, in light of recent events, Rainbow Noir, a support group for LGBTQ+ people of colour. As Braínne explains, “We’re keeping the shows free because we believe representation matters and we don’t want people to miss out on the show if they couldn’t afford to watch, however we will be asking that audiences donate to either of our chosen charities if they can afford to do so.”

The Proud Trust is a life-saving and life enhancing organisation that helps LGBT+ young people empower themselves, to make a positive change for themselves, and their communities. Rainbow Noir is a volunteer lead social, peer support and community action group, which celebrates and platforms people of colour who identify as LGBTQ+.

The stream will go live on the group’s youtube channel (www.youtube.com/cszuk) from 7pm BST. You can find out more about ComedySportz shows and workshops by visiting www.comedysportz.co.uk.

To find out more about the chosen charities, visit https://www.theproudtrust.org/ and https://rainbownoirmcr.com/ today.