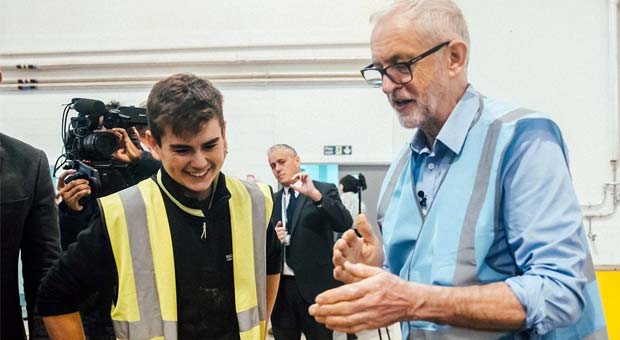 Latest in the series of the parties stance on LGBT issues

Jeremy Corbyn is currently leader of the Opposition after having won the Leadership Contest in 2015 by 59% of the vote. In 2016, Labour MPs attempted to remove him after growing unhappy with his leadership but he went onto win another leadership contest with 61% of the vote. In 2017 the Labour Party attained better than expect result in the election of that year by decreasing the Tory Majority and shoring up his position as the Party Leader.

Jeremy Corbyn time as leader has been dogged by controversy with accusations of antisemitism being rife through the Labour Party since he took over and a flimsy approach towards the Brexit crisis engulfing the country. At the same time, he has survived 3 Tory Prime Ministers and holds tremendous support among left leaning voters. Corbyn has campaigned against tuition fees, the Iraq War, privatisation of the NHS and Apartheid throughout his time in politics.

Since the 2016 referendum Corbyn and Labour have been accused of having a muddled position with some accusing Labour of wanting to play both the remain and leave side. With the election looming Jeremy Corbyn has clarified his position.

Should Labour gain a majority they would seek to negotiate a new withdrawal agreement which likely maintain the Custom Union and freedom of movement. Within 6 months of the election the Labour Party would seek to put their new deal to referendum with an option to remaining in the EU an option. Corbyn has vowed to stay neutral in the referendum and allow the people to make the final decision which would be put into law depending which way the people vote.

The hope would be that this gives people a real choice and ensures the people get a final say. The option of a Custom Union would make trade easier than the deal currently proposed by the Conservatives. The Liberal Democrat’s will accuse this deal of being another damaging Brexit with remain always being the best option. The Tories and die hard leavers will claim it isn’t a real Brexit and would tie Britain into too much European law.

Corbyn has vowed to protect the NHS from further privatisation and has made clear that the NHS will never be put into any trade deal with the US or any other country. Corbyn released the document without redactions that show the Tories have discussed putting the NHS up for grabs in a trade deal with Trump’s America.

Labour have stated they’ll put an extra £26 billion into the NHS by 2024. The £26 billion would come from reversing cuts to corporation tax. The extra money is more than what is proposed by both the Lib Dem’s and Conservatives. It remains unclear as to whether this money would be enough to deal with some of the serious issues facing the NHS including a loss of nurses and a notorious increase in A&E and hospital wait times.

Labour Government would also establish a state run drug company to help remove private health forms taking a strangle hold over the NHS and bring down the cost of developing new drugs. They would also scrap prescription drug charges.

The Labour Party would instrumental in calling the situation facing the planet a climate emergency. They’ve announced for immediate action in reducing Carbon Emissions and plans for a Green New Deal to help create new jobs in emerging industries.

They're seeming for millions of homes to be built with insulation and solar panels so that those on low incomes have access to warmer and more energy efficient homes.

Labour and Corbyn have an exemplary record on gay rights and wider LGBT issues with the Labour Party having overseen a revolution for LGBT issues between 1997 and 2010. The Tory led government would also never have been able to pass same-sex marriage without the support of the Labour Party due to opposition from members of the governing party.

Looking into the future the Labour Party will make sex education including LGBT issues compulsory and likely reform the Gender Recognition Act. They’d also be set to make PREP accessible on the NHS rather than go through the trial that is currently ongoing.

Labour is likely to face a difficult election with the Tories and Brexit party eating into their traditional seats in the North and the SNP likely to dominate Scotland. The Lib Dem’s are likely to make things tight in London but the millions of new voters could make the difference with many under the age of 35 years old. Labours strong points are on the NHS and ending poverty.