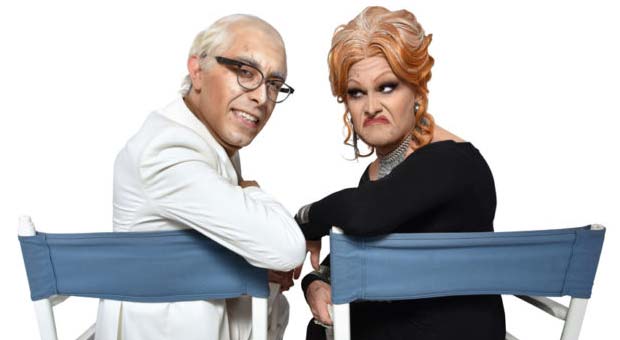 The long-endured cabaret duo have long since gone their separate ways; Jinkx has become a faded TV movie starlet and Major has faded into musical obscurity – with each of them clinging on to what tiny scraps of fame they still have.

Now, after decades of anticipation, the two of them have come together for one final reunion upon the stage.

Following on from their incredible global tour of The Ginger Snapped, which featured Jinkx Monsoon and Major Scales performing songs from their album of the same name, their collaboration with Peaches Christ and Ben De La Crème in the smash hit comedy tour Drag Becomes Her and their previous tour of The Vaudevillians which was a roaring success across the world, Together Again, Again brings Jinkx Monsoon and Major Scales back together on stage for what is set to be yet another spectacular masterpiece of music, comedy and hilarious antics.

Since winning Season Five of RuPaul’s Drag Race, Jinkx Monsoon has gained a massive global fan base and toured the world performing her original cabaret shows with her music partner, Major Scales. The duo have also released two albums: The Inevitable Album and The Ginger Snapped. Jinkx has leant her voice to Cartoon Network’s Steven Universe and Mighty Magiswords. Her webshow, Cool Mom, co-starring her comedy partner Nick Sahoyah, can be seen exclusively on WOW Presents Plus. Jinkx Monsoon has returned to RuPaul’s Drag Race regularly to appear on the show with other winners and as part of competitions, as well as appearing with other contestants from RuPaul’s Drag Race in the yearly RuPaul Drag Con events that are hosted across the world. Jinkx Monsoon remains one of the most successful and most popular winners of RuPaul’s Drag Race of all time.

As early as 2006, Jinkx Monsoon’s alter-ego Jerick Hoffer appeared as the lead dancer in the world's largest drag queen chorus line, which made the Guinness Book of World Records. By 2012, they had advanced to roles in Seattle theatres, playing Moritz in Spring Awakening (produced by Balagan Theatre), Angel in Rent and Velma Von Tussle in Hairspray (both produced by The 5th Avenue Theatre). In 2016, Hoffer played Hedwig in Hedwig and the Angry Inch (produced by Balagan Theatre and Seattle Theatre Group). As well as their most recent album, The Ginger Snapped, Jinkx also released an album in 2014 called The Inevitable Album, which included the hugely popular singles Coffee and Wine, The Bacon Shake and Jinkx’s version of Radio Head’s Creep. On screen, Jinkx has appeared in an episode of Blue Bloods and joined the cast of Wes Hurley’s hit comedy series Capitol Hill. Following the success of the cult YouTube series, Drag Becomes Him, Jinkx successfully raised enough funds via Kickstarter to turn the series into a feature length movie of the same name which was released in 2015. Jerick Hoffer has managed all of this while suffering from narcolepsy, which was revealed during his appearance on RuPaul’s Drag Race.

Major Scales is the evil twin of Richard Andriessen, a musician, writer and performer based in Seattle. He has written everything from award-winning New York shows on the east coast to music for amateur adult films on the west.

Soho Theatre is London’s most vibrant theatre for new theatre, comedy and cabaret. They are a charity and social enterprise, driven by a passion for the work they produce, the artists they work with and the audiences they attract. Soho Theatre’s home is in the heart of the West End - three performance spaces, a busy bar, and a fast-changing festival programme with up to six shows a night. Firmly established on the London cultural scene, they’re now expanding into an additional 1,000 seat venue in Walthamstow, touring across the UK, India and Australia, and creating digital content.