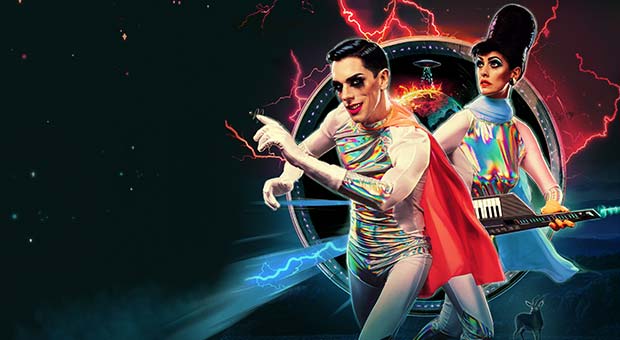 HOME is pleased to announce the World Premiere of Bourgeois & Maurice’s Insane Animals, a modern mythical musical rushing headlong from the dawn of civilisation to the sequinned near future.

Bourgeois & Maurice (George Heyworth and Liv Morris) are a musical duo whose 10-year career has built them a reputation for style as sharp as their wit. They began their career working in the bars and clubs of London, and cutting their teeth at the Edinburgh Fringe, before moving into performing regularly at Soho Theatre and touring the UK (inc the legendary Taurus Bar on Canal St) and abroad in venues from Belgrade to New York. They have performed at the Royal Opera House, Southbank Centre and Sadler’s Wells. Their music explores the mundane absurdity of modern life and wraps it up neatly in a catchy pop hook. Armed with acid wit, a piano and several inches of make-up, the pair are innovative, provocative and irresistible.

Insane Animals opens with the planet in chaos and humanity hurtling towards extinction, at which moment two hyper-glam aliens arrive on earth with a simple mission: to help the human species survive. But first they just have to figure out what makes humans human…how hard can it be?

This brand-new mind-bending, time-travelling musical comedy from “modern day music hall stars” (Guardian) Bourgeois & Maurice is packed with songs that are satirical, sharp, side-splitting and salty, with a hero’s journey that is out of this world.

This glittering production sees Bourgeois & Maurice joined by a phenomenal cast of actor-musicians for a queer unravelling of past and present, fact and fiction, life and death.

The play is the result of HOME’s pioneering T1 Commission, an unrivalled opportunity for mid-career theatre makers to make a new piece of work for the main stage. This unique commission included a bespoke, two-year residency with training, shadowing opportunities, practical R&D and mentoring from HOMEs creative team alongside a team of international industry professionals.

The show is directed by the multi-award nominated Phillip McMahon, Lyric Hammersmith Associate and one half of pop culture renegades THISISPOPBABY. The artistic team is completed by musical director Victoria Falconer, lighting designer Sinead McKenna and costume designer Julian Smith.

Quotes from the press:

“It’s hard to think of any other act delivering such clever, funny and sharp material” – Time Out

“Like something out of mars attacks! by way of east London nightlife, B&M have worked their way up from the capital's alt-cabaret scene to become modern day music hall stars” – The Guardian

Please click below for more detail and to book.