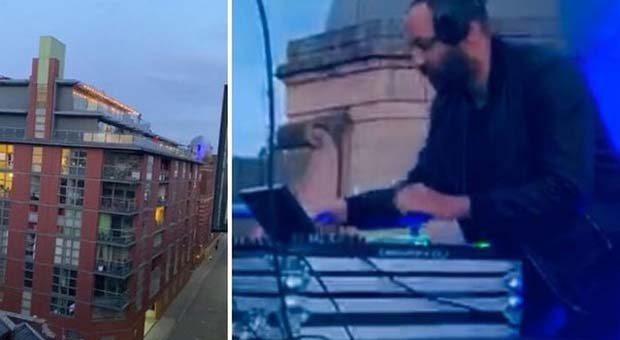 As Mancunians take refuge in their homes and wait out the coronavirus storm, Nkosi, also known as DJ Coast2Coast has been lifting peoples’ spirits with his rooftop raves.

The Ancoats-based wedding DJ has been performing for all the residents of the Royal Mills development and beyond to keep them entertained while they wait for the pandemic to pass.

After realising how empty the area was, Nkosi decided to do something to bring some life back into his neighbourhood.  A friend and neighbour Zoe owns two apartments which are being converted into one, this meant that Nkosi could go through an empty apartment to a secure balcony and practice social distancing while performing.

He said: I was taking my son for his daily exercise, and it was so quiet. Later when I started talking with my friend Zoe, she suggested doing a show on the roof.

He laughed, saying: “She said that if it didn’t cheer me up, it would certainly cheer everyone else up, and so we tried it!”

After setting up on her roof, he played a set, breaking the deafening silence of the evening. The performance included smoke machines and lights, and locals could even be seen dancing at windows and on their balconies during the performance.

AncoatsPlus, which is run by Dean, his husband Gary and their partner Iain, live streamed the performance on their Instagram and Facebook page and classic dance anthems such as ‘Whitney Houston's I'm Every Woman’, Black Eyed Peas' ‘I Gotta Feeling’, and Fatboy Slim's ‘Right Here, Right Now’ were played into the homes of the residents. Watch the video here.

Nkosi said that residents from the area and beyond were expressing their gratitude, with messages of thanks even coming from listeners beyond the immediate area.

He added: “It was kind of emotional, the response that people had. People saying thanks and how they loved the little break from it all.

“What I’ve been realising is that DJs’ and entertainers’ business might have stopped, but in this time it’s entertainers that are responsible for motivating people, and to make people happy.

Despite all the doom and gloom, Nkosi shared that he has enjoyed seeing people being kinder to one another while in isolation. “I think what’s really strange is that before all of this happened, a lot of communities were becoming more and more isolated from each other, and now, you start to realise the people you need to think about are the people who are closest to you.

“There’s an elderly couple whose shopping and prescriptions we pick up for them, because they can’t leave the house, so we have to remember that we’re all in this together.”

He added: “With us, in our community, it feels like we’ve gotten closer together.”

“There are so many of them and my message to the community is when you see those people, you should smile at them and say thanks and let them know you appreciate it.

“You might not be able to be close to them when you say it, but just a wave to a bus driver would probably make their day.”

If you would like to learn more you can find DJ Coast2Coast here.

David Poucher for Canal St Online with additional thanks to Dean and Garry Thomas-Lowde.

If you missed out on the action and want to join in on spreading some positivity and good vibes, head over here and join in on the action next Saturday, 3rd April 2020 at 18:45. All they ask is keep maintaining all the usual social distancing and isolation rules, take care of each other, stay safe, stay home, but enjoy the tunes, grab a drink, open the window, tell them where you are listening from and send them a video of you dancing along untill your slippers burn!

We love our community. Keep the faith. Keep the spirit.