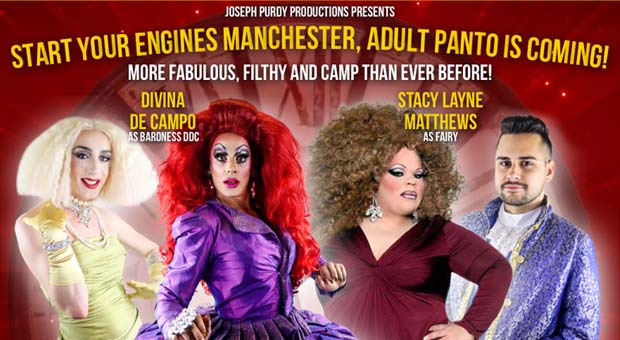 HUGE Adult panto to hit the UK next year

Joseph Purdy Productions are delighted to be bringing Adult Pantomime back to the UK this coming January and February!

Joining Divina and Stacy will be ‘Rob King’ as Prince Charming, best known for reaching for semi-finals of Britains Got Talent this year. Also joining the line us as one of the Evil Stepsisters is ‘Jamie Campbell’. Jamie is the boy behind West End sensation ‘Everyone’s Talking About Jamie’ which is due to leave the West End next year to embark on its UK Tour.

The show promises to be full of fun, filth and be very mischievous.

You can get the chance to see this 5-star celeb pantomime in many different cities including the following: