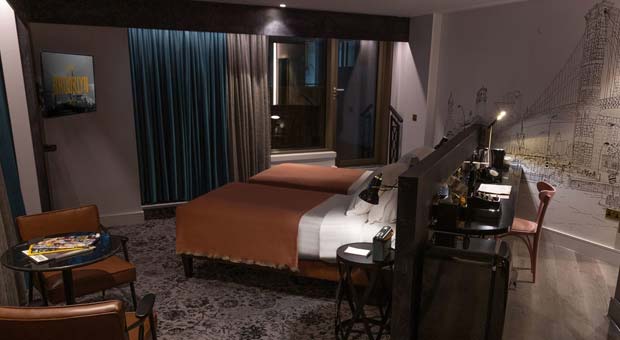 Today, Feb 14th the doors will open to Manchester’s newest design-led hotel, Hotel Brooklyn, right in the heart of Portland Street. Designed by Squid Inc - the team behind renowned Hotel Gotham – the name Brooklyn was inspired by the New York Borough and chosen for its resonating similarities to Manchester, in terms of its buzzing industrial growth, as well as its strength of identity and culture.

The 189-room hotel will pay homage to Brooklyn’s history from early 20th century to the present day, with the inclusive design of the hotel being overseen by Motionspot, the UK’s leading accessible design company. Positioning itself as Manchester’s most accessible hotel, Hotel Brooklyn will be a trailblazer in championing accessible, sexy and modern design for all.

Squid Inc’s starting point was to create a distinctly Mancunian destination that resonated with the characteristics of its counterpart, Brooklyn: the sense of neighbourhood, the grittiness of its culture and edginess of its people. Brooklyn residents, from Mel Brooks to the Beastie Boys, have helped inspire this vibe.

Beautiful Victorian brownstone buildings have become icons of both Brooklyn and Manchester and Squid Inc have been driven by the ambition that the architects of Brooklyn showed when repurposing an area which had fallen out of favour, transforming it into one of the most exciting parts of town.

Paying respect to the remarkable industrial craftsmanship of the Brooklyn Bridge (immortalised in many iconic images), Squid Inc have taken the bridge’s tension lines as inspiration, giving Runyon’s a flavour of downtown Brooklyn – a mix of gangster and quality, purposeful engineering – adding a desirable irregularity to proceedings.

On the top floor of the hotel, Salvation is the hotel’s dedicated events bar, featuring exposed brick work, pop art and neon lights to create a lively destination bar for the UK’s preeminent Northern city.

Throughout the hotel, regional suppliers have been selected wherever possible. Deanhouse Interiors were commissioned to fabricate the entire fit-out package, including cased goods from wardrobe and bedroom fittings, to the reception pods and 9th floor bar counter. Alongside this, PS Interiors sourced several key furniture pieces throughout, including the retro styled bedroom chairs, while sourcing New York street art was overseen by Elegant Clutter Artwork. In addition, Manchester-based The Knot Collective were commissioned to design two bespoke rugs for the hotel’s public spaces.

Harking back to historic Victorian brownstone buildings and their expansive drawing rooms, The Snug is designed to be a playful, contemporary twist on the traditional.  This space is cosy and intimate – a sanctuary from the hubbub – with an open fireplace and a record player spinning vintage records from the Manchester music scene.