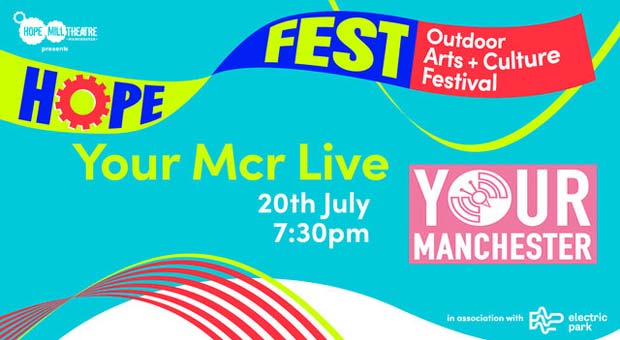 Manchester’s Hope Mill Theatre will launch a three-week festival in Ancoats this summer, HOPE FEST, with a programme of arts and cultural events from 16th July – 8th August.

The festival will take place inside a large theatre tent which will accommodate 250 capacity, based beside New Islington Tram Station (one stop from Piccadilly Station) on the junction between Pollard Street and Great Ancoats Street.

HOPE FEST, in association with Electric Park, has been made possible through collaboration and an ambition to champion the cultural arts post-covid with a unique programme of community-centric events.

The festival line up offers something for everyone including family theatre, comedy, music, plays and musical theatre as well as one off special community events.

The new pop-up summer venue will include an onsite bar and eating area, with BBQ. Offering a range of local beers and spirits and good grub!

Hope Mill Theatre are also launching a special FANCOATS scheme for local residents, offering ticket discounts and an invite to a one-off residents gathering, bringing the local community together.

Matt and Phreds Music Sessions: Matt & Phred’s presents 5 of the outstanding bands who play at their Northern Quarter venue. From Brazilian Jazz and Pop, to Swing, to Live Looping, to full-on Funk/Soul/Hip-Hop party-starters; there’s something for everyone. The carefully curated line-up has been selected to reflect the vast array of styles of music that Matt & Phred’s regularly and proudly showcases. With each performance boasting superb musicianship and a sound sure to leave audiences in pure admiration of the talent on-stage, these afternoon gigs are the perfect entertainment for audiences of all ages.

Other music events: include Jersey Boys tribute, ‘The Other Guys present The 4 Sea Sons’ A Tribute to Frankie Valli & The Four Seasons. This award-winning act combines the iconic harmonies and unrivalled showmanship of one of the Rock and Roll Hall of Fame's most prestigious groups, ensuring their legacy continues to live on. featuring a collection of classics such as 'Sherry', 'Walk Like A Man' and 'Oh What a Night’. The UK’s number one Dolly Parton tribute act Kelly O’Brien brings The Dolly Show, featuring the best dolly hits from I Will Always Love You to Jolene. There will also be a silent disco, with music by Manchester afrobeat inspired rock-funk band, Agbeko.

Comedy: Jason Manfords Comedy Club will host an evening of some of the region’s most exciting comedians. Yes Queens, the West End’s first female-led improvised comedy night, featuring top UK impro talent from such Olivier Award-winning productions as Showstopper! The Improvised Musical, Austentatious and Mischief Theatre. Yes Queens is interactive theatre at its best, with the audience playing a key role in a night of games, scenes, sketches and songs – all improvised from their suggestions. The Hope Fest Comedy Gala in association with Nodding Dog Comedy will host a line-up of comedians from across the UK including Boothby Graffoe, Elf Lyons, Mike Newall and Vince Atta.

Family and kids Events: including the tour of Stiles & Drewe’s Three Little Pigs The Musical. From Stiles and Drewe, the award-winning musical team behind Honk! and Broadway's Mary Poppins, comes The Three Little Pigs, a "very curly musical tail" that is perfect for the whole family! This new version of the classic story is full of catchy songs, clever rhymes and silly charm, but also has some very smart things to say about home and family. There will also be a sing a long film showing of the much loved movie, Frozen.

Touring productions: including, Judy & Liza. Judy Garland and Liza Minnelli are back together again thanks to a sensational musical experience, Judy and Liza.  This dazzling production tells the turbulent tale of Hollywoods biggest stars against the backdrop of their infamous 1964 London Palladium concert.

Community Events – Dog Fest: in partnership with The Barkside Manchester doggy day care, Betty and Butch doggy food and treat store and dog training company CB Dogs. This event will be hosted by Hope Mill Theatre Patron Hayley Tamaddon and is open to owners and dogs and includes fancy dress competitions and a doggy Dj. The venue will also run one of their Play Reading sessions, which allows people to come together to read a play.

Film Screenings: There will be a film showing of cult classic movie, Coyote Ugly, which will offer movie goers a cocktail and the opportunity to get on those denim shorts and cowboy boots and dance. Coyote Ugly is a 2000 American romantic musical comedy-drama film based on Coyote Ugly Saloon. Aspiring songwriter Violet Sanford, after getting a job at a women-run NYC bar, comes out of her shell.

Through the Mill: Hope Mill Theatre’s annual playwriting prize which launched last year and received over 500 submissions will see the finalists come together for an evening. The 12 finalists will share an excerpt of their pieces in front of an industry panel and mentor Jonathan Harvey, where the winning play will be announced.

Up Ere Productions present Who killed the Lollypop Man: After the success of ‘Who Killed the Lollipop Man?’ UP ‘ERE are back with a brand new interactive murder mystery – this time in person and set during late 19th century Salford.  There has been a murder at Mill and it’s up to you to find out who did it!

Manchester Culture: Manchester ADP will relaunch  their Scripts Aloud evening of new writing and Your Mcr will host an evening of music and interviews with celeb guests with presenters Belinda Scandal and Michelle Eagleton. The Sunday Boys Choir, Manchester’s LGBTQ+ choral group will host a concert of music. Entr'acte’s and Encore’s, Ever wondered how your favourite movie and theatre characters would be seen through queer eyes? Well look no further!Donna Trump, co-founder of ‘Queeriosity - Manchester’s Curious Cabaret’, presents an evening of movie and theatre icons through interpretations of drag, burlesque and performance. Come join us for some classic staples, hidden gems and showstoppers in ways that you would never expect them in…..

William Whelton, Executive Director at Hope Mill Theatre, said: “After a year of closure and uncertainty we have been working hard to bring together a festival of outdoor work in our local area. This is an opportunity for us to bring together our audiences in a new and exciting way as well as engaging with a whole new audience. The New Islington area and surrounding community has been our home for over 5 years now and has many diverse and creative residents. With HOPE FEST we also have a varied and diverse line up of arts and culture available, which offers a special opportunity for us to bring together the local community under one roof, or tent! It is important to us that HOPE FEST has something for everyone, whether it be a Sing A Long Frozen for families, music from Matt & Phreds a celebration of Musical Theatre or a dog friendly event, this is an incredible opportunity for our organisation, in a very exciting phase for the New Islington and Electric Park area.”

Ben Cross from Electric Park: “The pandemic had an immediate and substantial impact on the arts and cultural sector and is, unfortunately, likely to be the slowest in its recovery. And so, in that context, we’re immensely privileged and proud to play our part in supporting this incredible grassroots organisation at a time when it is needed most. Through their exciting programme of accessible events, HOPE FEST will celebrate the best homegrown talent Manchester has to offer. And everyone’s welcome because we’re all about bringing people together and providing best-in-class social and cultural amenities at Electric Park. It’s a place where everything’s possible.”

Further line up and shows will be announced over the coming weeks, meanwhile click READ MORE