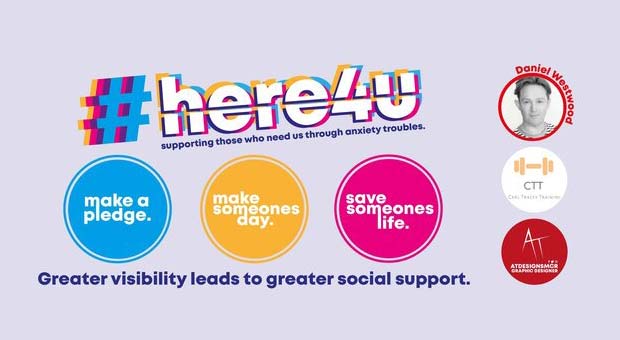 Actor and presenter Dan Westwood is spearheading the #Here4U campaign – a social media initiative and conversation aiming to raise awareness of mental health struggles, and open conversation for those who may feel alone. We sat down with Dan to chat with him about #Here4u, mental health on the national curriculum, and why it’s okay to ask difficult questions.

Dan’s initiative, #Here4U – an online video-based pledge movement – gained over 25k retweets on Twitter on its launch day alone. Gaining traction, the campaign was picked up and supported by fellow Corrie star Georgia Taylor, who lent her voice and a pledge of support, as well as The Hairy Bikers, Claire Sweeny, and members of the public from Ireland to LA, from Dubai to Australia.

“It’s for anyone,” Dan was keen to reiterate, “Not just celebrities. There are so many voices, people I know, complete strangers, who are making pledges, making sure people know they are there to talk to. Especially at the moment, anyone who might be struggling, anyone who might feel a bit embarrassed or face the stigma of mental health problems, there are pledges for them to see from so many people, just so they know there is always someone to talk to.”

With lockdown grinding the nation to a halt again, mental health conversation has felt at the forefront of many news headlines. Perhaps a constant reminder for some who might be feeling the pressure, but for others, Dan sees it as an opportunity instead to see those who are open and honest and speaking up about the struggles they are facing. “I’ve seen lots more checking in with people,” Dan said, “It’s almost like one good thing that’s come out of lockdown. There are, of course, unfortunately more struggling, but so many more speaking up and reaching out.”

Whilst the openness of conversation has undoubtedly been a success, I wondered then, what was next for Dan and his campaign, what he’s hoping it grows into in the future. “I wanted to get into schools, before the lockdown started, but I’ve had to push that, hopefully only to the new year.”  Dan has been open and honest about his own mental health struggles, but believed it took a long time to be honest because he lacked education. After struggling with anxiety and panic attacks whilst on stage and filming, he initially believed that if he talked openly about it at work he would be seen as unreliable – and so now wants schools to change these kinds of damaging preconceptions. “I really want mental health education to be on the national curriculum,” he said. “I want parents to feel comfortable calling up and saying ‘My child’s not going to be in school today, they are having a bad mental health day,’ and the teacher saying, “That’s okay! We’ll check in tomorrow, let us know if there’s anything we can do.”

“So, it’s twofold really,” Dan explained, “It’s both parents and teachers recognising kids who are struggling, and it’s teachers understanding and being okay with it, and knowing what to do.” This was another one of the positives Dan recognised as coming out of lockdown. “It’s a chance to ask questions, for people to learn. The openness of mental health conversations happening now is not only ‘why do I feel so upset?’, but ‘what triggered this? What do I do next?’, as well as those who perhaps don’t struggle to ask questions like ‘How can I help?’ or ‘What does it feel like?’  It’s about parents and teachers recognising it in kids. Talking about it helps people not only during a bad time, but before, and in the future.”

Dan’s campaign is also now turning to others in the form of a podcast, hopefully coming in the new year, with ‘sit down cuppa’-style conversations with guests. “People have been so open. It’s helped with my anxiety, and I hope it is helping with theirs.” Topics have turned to various topics on mental health, the impact on work and school, and in particular men’s mental health – a topic Dan is passionate about opening the conversation about in particular.

“One guest was what we might think of as a bit of a ‘manly man.’ He sat down and told me he would never talk to his mates about this kind of thing – so I hope we’re breaking boundaries with the podcast. There was a mum on there, who recognised something going on with their child, and she asked questions. It’s another outlet – the range of people we have on opens another outlet, as well as social media, for people to listen and learn. I hope we’re changing the preconception, making it known that anyone can be impacted.”

How Dan manages to fit it all in was admirable; navigating my chat with him, plus an Instagram Live event for a mental health charity, plus winding down from a full day of rehearsals – it would be easy for him to look to someone else to take the lead on the campaign. But he was passionate about it, and passionate it continues: “There’s only so much I can do,” he said, “I want it to be like a paper-chain chat, if you know what I mean? One person talks, and another person talks, and it goes on and on.”

“It’s a choice to do good,” Dan said, “Social media can be a dark place, used for some bad things, but the relief you feel when you speak out – even write a letter, if you don’t feel like speaking – is overwhelming, and this is a choice to do good, be something light, help someone else.”

Not only Dan’s campaign but Dan himself – feels like a light in a difficult time. Join in the conversation on Twitter, using hashtag #Here4U.