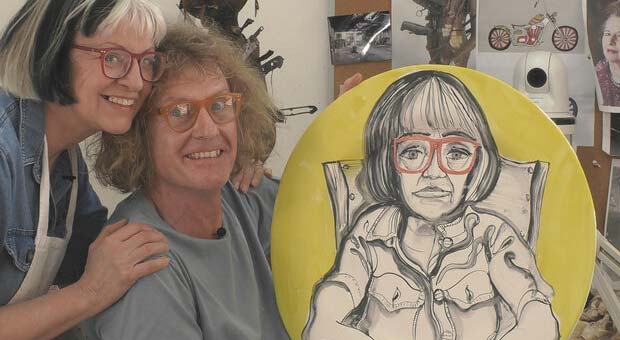 Manchester Art Gallery will present an exhibition of the art works selected by artist Grayson Perry during Grayson’s Art Club, the popular Channel 4 TV series. All the works on show are very personal visual representations of lockdown, made by the public, well-known artists and celebrities. This celebration of creativity in people’s homes chronicled the changing moods of Britain in isolation, providing a unique record of this globally experienced, extraordinary time.

During lockdown, Grayson Perry, one of Britain’s foremost artists, brought the nation together through art, helping them to unleash their collective creativity as part of his TV series by Swan Films for Channel 4.

Every week, he hosted the show from his own studio – taking the country with him as he created his own new art works. Grayson and his wife Philippa talked to other famous artists and creatives about how they were spending their time in isolation and invited them to make their own works in response to this unprecedented crisis. Each week a different theme – portraits, animals, fantasy, view from my window, home, national spirit - was explored.

A key element of the series was Grayson asking members of the public to show him their own artworks which they have been making at home, talking to them via video calls and choosing artworks he loved in each episode. He received nearly 10,000 entries, an overwhelming response to his call out. The variety of responses – using canvas, paper, photography, sculpture and mixed media - showed the imagination, skill and creativity spread across the whole country. These works, alongside those of Grayson Perry, Philippa Perry and the invited well-known artists and celebrities, will be on show this winter at Manchester Art Gallery. List of artists in Notes to Editors.

Produced by Swan Films, a one-off celebratory episode of the show will air on Channel 4 this winter, allowing viewers to take a sneak peek behind the scenes of the curation and development of the Art Club exhibition at Manchester Art Gallery. Grayson will meet in person at the gallery (socially distanced, of course) with some of the public participants who had their entries selected for the exhibition, as well as some of the celebrity guests and well-known artists who joined him for the series.

Grayson Perry said: “I could not be happier with Manchester Art Gallery, the venue for the Art Club exhibition; it will be in a people’s palace of culture. All the artists who appeared on our TV series put in a lot of skill, thought and feeling into their works and I am so proud that they will get the opportunity to see their art hanging in this grand, nearly 200 year old institution.

From its inception Art Club was about the benefits of making art that are open to all. In the true spirit of the series we will be exhibiting the works grouped not by hierarchy of fame or value but grouped in themes. Each artwork will hang amongst others that talk of the shared experiences we have lived through during this extraordinary time of the Covid crisis. This show is a crystallisation of the feelings and obsessions of artists from all over the country whether it is their first painting since primary school or they are world famous.

This will be a show about the joy and solace of making art. It will also be a still moment to reflect on a situation that has affected everyone on the planet.”