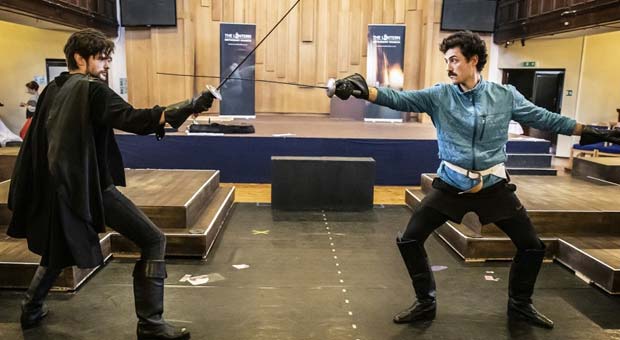 That is how Benjamin Purkiss, who will be playing the lead role of Zorro, briefly described the production.

The immersive performance will open at Manchester’s Hope Mill Theatre on the 14th March, and has so much more to offer than you could ever begin to imagine:

“It’s the kind of show where as soon as you arrive at the venue there will be something going on".

“You can go in, you can try the food, you can have some drinks, you can dance, you can have loads of fun. It’s going to be an experience from the word ‘go’.”

Zorro has so many elements - you’ll probably find yourself struggling with where to look - from great flamenco dancing, to Cante jondo singing, magic, music and, of course, sword fights.

“There is a sword fight at the end of the show that is definitely one to watch out for. I’m really excited to get everyone to see it. We have been working on it everyday for the last 3 or 4 weeks. There is so much work and practise that has to go in, especially with the sword fighting.”

Renny Krupinski is a hugely sought after, industry professional Fight Director, and has been choreographing the fights scenes for Zorro over the last few weeks. We asked him the question which will be on the tip of the audiences tongues: how dangerous is it really?

“It shouldn’t be dangerous at all. There shouldn’t be even a half a percent of danger involved. It has to look dangerous, it has to appear fierce.

“The act of safety is paramount.”

I’m sure the audience will be glad to hear that no real blood will be shed on stage.

Renny explained that the most challenging part about choreographing for Zorro has been:

“I am loving Zorro. It has been a dream and a challenge to put this many sword fights on a postage stamp. The space at Hope Mill is terrific. It is a challenge to put really big sword fights in a very small space, and make them safe, and make them thrilling. I’m pretty sure the audience are going to sit there shrinking back in their chairs because they feel that the swords are getting close to them.

“You have to build a fight on a technically solid framework so that any nerves, any heat of the moment, any unexpected or unwanted emotions or movements are not going to change the fight. You can’t improvise in a fight.”

When asked what the main selling point for the production is, in his own opinion, Benjamin replied:

Krupinski reinforced his faith in the production, saying:

“I genuinely think the audiences are gonna love it. The music is infectious. The dances look fantastic.”

With so much going on, Zorro will be one that you won’t forget. Tickets available now below